BRUCE SPRINGSTEEN - LETTER TO YOU 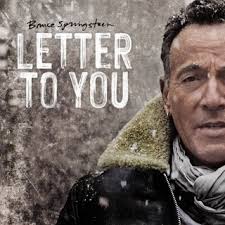 If we ever had the time again

Then I would make more time

In the meantime I’ll hear your whispering

In every Bruce Springsteen rhyme.

I wrote these words back in June when my friend Glenn Jordan died suddenly. It is still hard to take in. I attempted to capture Glenn in a poem that had me standing beside him, by his own secret gifting, watching Bruce Springsteen at the Kings Hall on a July afternoon in 2013. Glenn and our other mate Mark Houston were Bruce mega-fans. I wondered if I knew anything about Bruce at all when I was with them!

Not long after I wrote the words I heard there would be a new Springsteen album this year. I immediately considered what that would be like with out Glenn. As I listened to that record, as soon as it went on stream at midnight, I could hardly take in the extra poignancy.

The opening lines of the first song One Minute You’re Here:

Blow your whistle long and long

One minute you're here

Next minute you're gone

The closing lines of the last song I’ll See You In My Dreams:

I'll see you in my dreams, we'll meet again in another land

I'll see you in my dreams, yeah around the river bend

For death is not the end

And I'll see you in my dreams

Bless my soul. It wasn’t just that I was imagining Glenn’s thoughts about these songs. They almost became about him. If you’ve lost a fanatical Bruce fan in recent months this record is emotional, cathartic, and somehow with a little Springsteen genius, celebratory.

Bruce Springsteen has lost a lot of friends down the years. It is well known about the death’s of The E Street Band’s Clarence Clemons and Danny Federici but it seems that it was the death of George Theiss from Springsteen’s first band The Castiles that inspired Letter To You.

Letter To You is as urgent a record as Springsteen has made in decades. It is loud and raw and rocks out with only that opening One Minute You’re Here showing any reflective quiet.

Every other song sees The E Street Band let loose, tight as ever and playing to the very edge of full tilt. Letter To You is a bang bang bang of boom boom rock songs. There’s no let up and no desire to even get up to turn the vinyl over. It is as gripping from start to finish as any Bruce Springsteen album has ever been.

Now that doesn’t mean that it is the best Springsteen album though with an artist like Springsteen that is a futile venture. You can’t set 50 year’s of a catalogue side by side never mind the different genres and reasons to make albums that Springsteen has dabbled in.

Letter To You is not full of hit singles or songs crafted to a sheen. If ever a record needed listened to all the way through this is it. It sounds like a band becoming aware of their mortality and deciding to get together and have a big blow out before they get blown out. The fun of playing with mates is all over this record. There is an urgency in the joy of it in the midst of the grieving around them.

If it had come out 40 years ago who knows how many of these songs would still be in the set list but if this band can get out the other end of Coronavirus intact then these songs will fly off the stage on the next band tour. Letter To You, Last Man Standing, Land Of A Thousand Guitars, Ghosts and even Power Of Prayer are songs full of the joy of bands and music. Live? It’ll be something!

Of course I am now considering that if I should ever see this live in Belfast my friend Glenn will not be there to stand beside me and enjoy it. I hope though that as Bruce rejoices about life and celebrates the love of lost friends on the stage that we will all be part of that emotion in the crowd. Bruce has broken that barrier yet again. He has spoken for us and yes Glenn I hear you whispering…

Ghosts runnin' through the night

Our spirits filled with light

I need, need you by my side

Your love and I'm alive.

Emotional feelings captured so well here, Steve. This makes me want to and give the album a listen to now. Thanks.