Home Archives Profile Subscribe
GALGORM - MY VILLAGE, ALL OVER THE TV
WILDERNESS ROAD - TOMORROW IN FITZROY: 27.9.2020 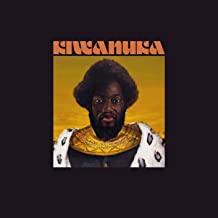 There are a few things that make a record great for me. It’s good if it is eclectic, cohesive and thematic. It is good if it is beautiful, familiar in many ways but full of surprises.

Michael Kiwanuka ticks every box on his Mercury Music Prize winning album Kiwanuka. His third record is the culmination of the development in his imagination and musical implementation from his debut record Home Again through his second record Love and Hate. Home Again as an acoustic record in the traditional songwriter style, Love and Hate brought in electric guitars and riffs and grooves.

The third record simply called Kiwanuka has all of those albums and more. It is tender at times, riffed up at other times with all kinds of intricate little joins in-between. There are all the great influences - Curtis Mayfield, Pop Staples, Bill Withers, Donny Hathaway and lashings of the psychedelic guitar sounds of Jimi Hendrix. Kiwanuka throws tablespoonfuls of all of these into the most original of rocked up concoctions.

For me, I am particularly chuffed that Kiwanuka won the Mercury Music Prize as I claim him as Ugandan. Soul Surmise readers know how dear that country is to my heart. Kiwanuka’s parents were Ugandan and left to escape the oppressive regime of Idi Amin. I happened to be in Uganda when Love and Hate came out and the location of first listens added resonance.

There is a personal introspection to Kiwanuka’s work. He has admitted to self doubt and naming the album after his surname is a statement of pride in who he is and has become. There is a spiritual light to his music too and he is a not without social critique and political comment.

Kiwanuka is everything I look for in a great record.