THANK YOU RICHARD SPRATT (For 11 Years at Fields Of Life) 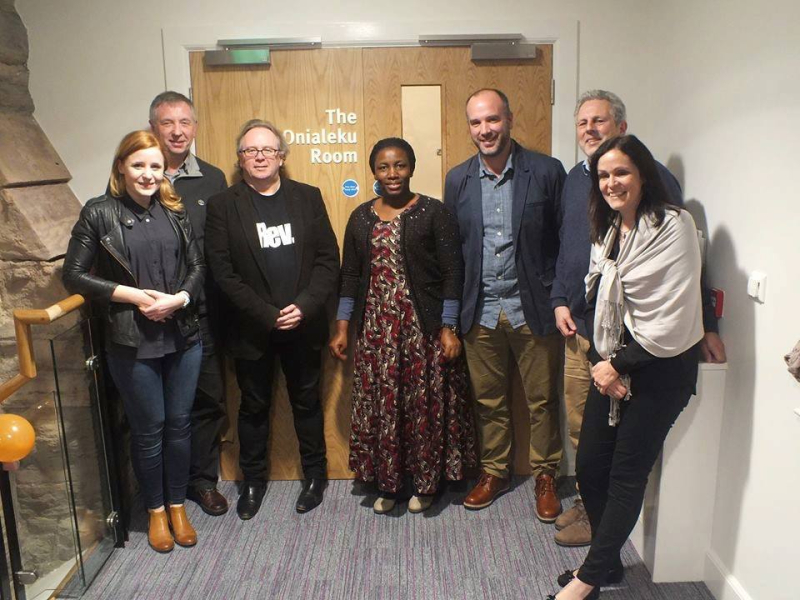 Today is a sad day for the Stockman family as Richard Spratt steps down as CEO of Fields of Life. What a blessing he has been to myself, Janice, Caitlin and Jasmine and to the entire Fitzroy congregation. Here is my tribute.

For those who read Soul Surmise regularly you will be aware of a plethora of posts under the Uganda Dairies category. If it was not for Richard Spratt they would not exist!

I first came across Richard Spratt when I was a Chaplain at Queens University living alongside 88 students in Derryvolge Hall. Actually when Richard was around there were only 58. He was dating one of our students, Katie Moffatt, now his wife!

About those days I remember most that he was a talented footballer. Indeed Richard went on to play Intermediate football and now manages Ballygowan.

I don’t remember Richard being around at a lot of our events. He didn’t live in. Years later he dared to suggest he remembered something that I preached one Sunday evening.

Anyway, the next I heard Richard was CEO of Fields Of Life, taking over from their founder Rev Trevor Stevenson. I began to take an interest in Fields Of Life when my friend Alain Emerson took teams and then built a school in memory of his young wife Lindsay who sadly passed way at just 23 years of age.

Indeed Alain’s story made me think that Fitzroy should tithe their Halls extension and we invited various NGOs to pitch projects in developing countries.

So, the next time I saw Richard he was sitting in the front room of the Manse pitching his project. I personally couldn’t see Fields Of Life being established enough to convince our sub committee but I was not reckoning on Richard Spratt.

Richard was impressive. He was warm. He had a little charm. You had to wonder how he got Katie (Joke bro!). He was inspirational about what Fields Of Life were doing. He was convincing about their infrastructure. He caused us to fall in love with a community in Arua, north west Uganda that we had never heard of before.

After interviews we were so unanimously convinced that we brought the funding of Onialeku Primary School to our Church Committee and Session. A sole nominee!

So started a new relationship with both Richard Spratt and Fields Of Life.

Fitzroy have been taking teams to Onialeku Primary School ever since, Fitzroy sponsors around 60 children and we have added to the primary school, a fence, water well, kitchen, text books and soon hopefully a nursery block too! Around 50 Fitzers have now traveled to Onialeku. So many more have knitted, crocheted, crafted, washed cars, made food, written songs and given money. Our partnership with Onialeku and Fields of Life has been the richest of blessings.

Richard took on a family type approach to the organisation that was set in place by the friendly approach that Trevor Stevenson had when he set the whole thing moving back in the early 90s.

There is a sense in Fields Of Life that everybody is in it together - the office staff in Portadown, Cork, Kent, Oregon and Kampala. Staff and schools and volunteers who go in teams or partner to fund projects. I have always felt a part of the community. When many NGOs use call centres with people who cannot answer your questions, with Fields Of Life I felt I was a friend of everybody, from the top to the youngest child wherever I met them.

Richard brought a financial sense to the CEO role, having worked in banking but also brought a developing missional theology. Thinking about how best to do Christian mission has been transformed over these past thirty years and Richard led Fields Of Life sensitively into that new thinking and practice, remaining Biblical and pragmatically imaginative.

I think I was fortunate that Richard really opened the community door to the Stockmans. In 2016 we spent 3 weeks in Uganda as a family and we had the privilege of visiting water drilling projects and a few other schools and spending time in the Shalom bungalow, getting to now the staff.

As if this wasn’t enough, Richard then, on Facebook very late one evening, asked me if I would help write Trevor Stevenson’s memoirs. That started another amazing project that is in its very last days. You should be buying it for all your friends at Christmas!

Working on the book gave me an opportunity to attend the 25th Anniversary Celebrations at the Fields Of Life Teachers Conference in Uganda and travel with Trevor to some projects. I then got to base myself in the Shalom flat again for a sabbatical to edit the book. All of this brought our family right into the heart fo the Fields Of Life family.

Last August when Jasmine decided to do a Gap Year Richard charmed her into committing to a year with Fields Of Life. The experience that they gave her looked on good on her CV that Reading University gave her an unconditional offer for International Development. So, as Richard leaves Fields Of Life today there are heavy hearts across the Stockman family.

I remember after hours and hours on the bus that first year to Arua in 2015 texting Richard and asking why he sent us to the back of beyond. By the time I had spent a week there I knew. Richard knew what he was doing and I am ever thankful for his strategy.

On that plane to Uganda for the Teachers Conference in 2018 Richard shared that something I said back in those Derryvolgie days resonated with him and Katie. Something about making sure you still commit to the ideals you have now when life breaks in. I was moved by that. I didn’t know that that preach had landed in fertile soil or would be remembered 15 years after when Richard took over as CEO of Fields Of Life. I didn’t know that I would benefit from my own words. If they are the only words that resonated with anybody in my 15 years in Chaplaincy and the harvest of Richard’s 11 years in Fields of Life is all I achieve, it will be well enough. Well enough.

So thank you Richard. And thank you Katie too. You’ve sacrificed as your husband has travelled back and forth to Uganda and done so much for so many. And the family… Jamie, Ethan and Amelie. God’s grace and imagination for the next chapter.