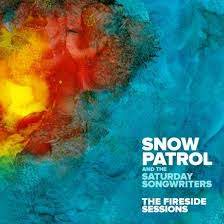 Here’s another mark of the talent and relational charm of Snow Patrol’s Gary Lightbody. Not long after lockdown in March he was one of the first to start Instagram gigs to see us through. When he suggested a songwriting night I sensed train crash carnage. How on earth could you write a song of any use with thousands of strangers on Instagram?

It seems that in the hour after the Instagram suggestions of chords and lyrics, Lightbody worked for an hour to create the song. He then sent them to producer, and associate Snow Patrol member, Iain Archer who worked night and day to create this EP that could sit comfortably alongside the Reworked record that Archer also worked on.

My particular favourites are The Curve Of Earth and Light Years, the latter benefitting so much from Miriam Kaufmann vocals. Kaufmann’s harmonies are becoming a Snow Patrol hidden secret. More of it.

It is the lyrics that most impress me. Take the chorus from the first song written, Dance With Me:

The loudest silence brings a list of all our longing

Alone together in the dark

We'll ride this storm out in this quiet isolation

But the math, it can't explain our love

Or on Light Years:

Bright lights in time of darkness

You could be two meters away from me

But even distant, I'm with you

These lyrics touch on the Covid 19 lockdown but not to such an extent that it won’t stand on its on long after. They songs have catalogued the time without getting captured in it.

When I had the privilege of interviewing Gary Lightbody at the 4 Corners Festival in February he quickly dismissed my suggestion that he was first and foremost a poet. I do think though that the English teacher at Campbell College, Mr McKee, who inspired him so much gave Lightbody’s lyrics as much Seamus Heaney as he did Van Morrison or Bob Dylan.

What I am fascinated about here is how much the lyrics of Lightbody have influenced his Instagram strangers. When someone looks across the Snow Patrol catalogue in 25 years time they will not see much difference in the lyrical style of The Fireside Sessions and the rest.

So this is a lovely little extra release for Snow Patrol fans, tiding us over until this is all done and the band can get back with Jacknife Lee for the follow up to Wildness. It is another little light to come out of the shadows of lockdown. Lightbody has used the time well. Apparently he has an album or two tucked away!

Not only is The Fireside Sessions good but it is good for something. All proceeds will go to the anti-poverty charity Trussell Trust doing so much with Food Banks in these difficult times.

Wow that is such a lovely review I am actually welling up here reading it. So proud to be a Saturday Songwriter my claim to fame or my 15 mins according to Andy Warhol... This has got to be the music of 2020 we got through it and have left a legacy for years to come. Light Years is my fav as I have a wee Lric in there so proud Mummy of my wee chick xx

I am so grateful to be apart of a once in a life time experience
that has had such a postive and profound affect on me,and that we all
collaberated on..Gary and Snow Patrol and all involved I Thank you from
the bottom of my heart, and to all Saturday Song Writers.My heart bursts
with joy that this music to all who listen,will have a positive domino
effect and that those in need will have food on their tables from
all proceeds from the sales that go to Trusseltrust.Gary ,you are a wonderful
amazing man with a hesrt of gold and so very humble...Much Love to everyone,from a super
grateful fan from Canada.

Lovely review for indeed a lovely, magical man in Gary Lightbody,I was in a high fever near delirum March into April, could not get a Covid test in my small town to save my life, but that turned out okay because the ER sent me home to with meds and a Inhaler and to Gary, online. For 22 days 102 to 105, scary hurt to breath, I held my phone and saw Gary as my only companion. He kept me entertained,hopeful and laughing. Sleeping between shows, I'd set my alarm till Gary time. Later when better, I submitted chords, lyrics,art, met more fans,and just have had the time of my life with these opportunities to be spread across the world, as in LA and Russia, Ireland to Florida, yet feel all together. Gary has been an absolute joy, and the opportunity to participate in this effort and have it all go to charity puts us even more over the moon, over Mars. We pray everyone orders copies, stations play it, and we multiply goodness for as many as possible.