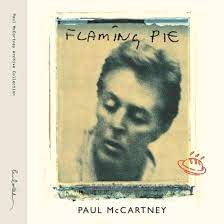 Paul McCartney’s tenth album under his own name arrived when his stock was as high as it had been since Tug Of War back in 1982. Not only had The Beatles Anthology series brought him to a younger audience but the biggest band of the day was pretty much a derivative Beatles tribute band - Oasis!

Listening back to The Beatles as they not only edited material but actually wrote new songs and hearing that same Beatles’ sound all over the radio, McCartney got his guitar out and retro rocked some old sounds that were now contemporary again. Jeff Lynne does his job as producer by scattering sweet sheen across it.

Flaming Pie might actually be the very best of Macca’s solo records. It is song after song of great writing, looser in atmosphere than most others, rocks when it wants to rock and goes all reflective too.

The title track has that mid 90s retro Beatle guitar riffing as does The Young Boy and If You Wanna, the latter two beefed up by Steve Miller as collaborator.  If you listen closely enough to Miller’s third contribution Used To Be Bad you might even hear echos of Rory Gallagher!

On the other side of McCartney’s palate, Calico Pie is a beautiful continuation of the finger picking beauty that started with Blackbird. Little Willow is prettiest melancholy, written for Ringo’s children when their mother Maureen passed away. Even more poignant when Linda McCartney died less than 18 months later.

I love the Archive Series, not so much for their remasters as their extra tracks. Here, that is a CD full of home demos that in the stripped back and raw form reveal the quality of McCartney’s melodies and show how they metamorphosed in the studio. It is very bespoke, intimate enough to have phones ringing and people walking around. We also get a rough mix of the rarity Whole Life a co-write with Dave Stewart. It is actually very like the Anthology songs, the different take on the by now familiar.

In the notes in the accompanying booklet George Martin is quoted as saying, “When I heard Somedays it immediately reminded me of vintage Paul. It’s quite difficult writing hits. Even when you’re the greatest hitmaker of all. It was nice to see that Paul was getting back to his roots. Because I think Somedays is a classic song. I think it’s one of those simple ones, deceivingly simple, very difficult to write. I loved it.’

Sir George has said it all. On Flaming Pie Paul McCartney’s mojo was back. Flaming Pie has deceivingly simple difficult to write classics strewn right the way through it. For me the extra CD might be my favourite of the entire Archive Series. There are box sets of this for hundreds of pounds. Rip off me thinks. The double CD will do me fine!