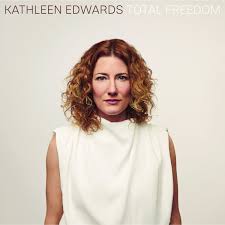 If there are any artists out there who feel that the muse has gone stale or feel that they are not getting the deepest gladness out of their art then Kathleen Edwards has the answer. Give it up. Walk away. Open a cafe.

That is what Edwards did. Eight years ago she had a critically acclaimed record Voyageur produced by the coolest of cool songwriters Justin Vernon. She was fed up while touring it and went off to the Stittsville, Ontario and set up a cafe called appropriately Quitters.

I have no idea how that has worked in a business sense but as an artistic move it has proved genius.

Total Freedom sounds just that. Here is a songwriter who cleaned the slate and has come back with an album of free flowing lyric, melody and Americana groove (is there a Canadana groove?!).

Edwards might be described as a direct peer of Jason Isbell or in the slipstream of her countrymen Blue Rodeo or maybe more accurately, in a less than accurate sense, the sound that would have been made if Suzanne Vega or Jonatha Brooke, instead of Stevie Nicks had been the associate member of Tom Petty’s Heartbreakers. It’s guitar. It’s great songs. It’s poetic lyrics.

This collection is personal, Glenfern about her old days on the road, Hard On Everyone about an abusive boyfriend, Fool’s Ride about the same scoundrel, Simple Math is about the better values of friendship that faithfully lasts from childhood and Who Rescued Who about the spiritual benefits of having a dog. It all ends with the acoustic strum of the cathartic ballad Take It With You When You Go.

It is as a consistent piece of work as Edwards has released. She seems in a good place. A place to look back and around her and make sense of it from a place of freedom. Total.