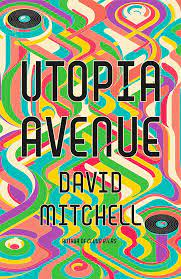 Twenty years ago I had an idea of a novel set in the heady days of 1967 to 1969 about a young songwriter who made it to the cover of Rolling Stone and then retired from rock music. The wy would be the essence of the book. Roisin Ingle even suggested that it was an intriguing idea when she reviewed my book Walk On in the Weekend Arts Supplement (peak of my writing career!)

I set it at that late 60s time for a few reasons (some I will keep to myself in case someday…) but one of them was that he would interact with my favourite artists of the day.

A chapter that I did write a draft of had my rock star on the beach at Ballycastle with Paul McCartney and the Beatle asking him what that piece of land was across the sea - the Mull of Kintyre! I had imagined another scene where he would drive through the Glens of Antrim with Joni Mitchell. Imagine Joni in Murlough Bay!

David Mitchell does this very thing in his eighth novel Utopia Avenue and he does it so very well. Oh they don’t come to County Antrim but are instead located in London, the Bag O Nails and Soho clubs and The Troubadour and Laurel Canyon in LA and the Chelsea Hotel in New York.

It would be hard to avoid the famous in those locations between 1967 and 1968. My favourite meeting is in the Chelsea Hotel where the keyboardist and singer and songwriter Elf gets in a lift with Leonard Cohen and doesn’t recognise him or his charm! The roof top party later in the night with Janis Joplin and a teenage Jackson Browne is a treat!

Mitchell’s 60s setting is of course a fascinating time. 1967 and the flower power All You Need is Love generation think they are literally on Utopia Avenue and then 1968 sees riots on the streets, Martin Luther King’s assassination and drugs taking hold. David Bowie can’t seem to get a hit record! It is the summit of hope before the avalanche.

So, to the fiction. Canadian music mogul Levon contrives to create a band for the times. They start gigging and writing and recording and begin to happen. We travel with the band, not only in their tour van but in their personal journeys. They have personal tragedy, broken relationships and mental health issues. There are drugs too. We negotiate the psychedelic mid 60s terrain with them, wishing them to the top.

Mitchell resists the meteoric rise story and as a result he makes rock musicians more ordinary than the iconic celebratory environment we often find them, both his fictional ones and the actual ones. Will they make it to the top is never guaranteed and I won’t be telling you here. It intrigues throughout.

I particularly loved bumping into Marc Bolan, Brian Jones, John Lennon, Leonard Cohen and Jackson Browne be it ever so fleetingly in the pages of a novel.

It is worrying that most of my year I read rock biographies and that this summer when I read novels I have included Utopia Avenue and Daisy Jones & The Six, two fictional rock biographies! Open yourself up a little Stockman!

Anyway, it was difficult not to compare and contrast. Of course David Mitchell is a lauded literary figure of our times and Utopian Avenue is a Booker Prize nomination and Taylor Jenkins Reid is a poppier novelist. Daisy Jones & The Six has a summer cover saying read me as a beach book.

However, though I will agree that Mitchell is an important writer and I loved Utopian Avenue, Daisy & the Six were more believable as an actual band than Utopia Avenue. Mitchell characters were more developed and the 60s scene much better set than Taylor’s 70s but I can actually imagine hearing the Daisy & The Six album and I am not hearing what Utopia Avenue actually sound like. I might prefer an Elf Holloway solo record!

In the end I am so glad I read both. I have learned that Mitchell seems to like a little time travel and a little fantasy throw into the realism of his novels and some of poltergeisty mumbo jumbo was a little much for me. I also found a couple of major moments a little predictable.

Overall though it needs to be declared that Mitchell is good. I did love the band members, wanted them to succeed in music and flourish in life. The characters are a whole lot more memorable to me than Daisy Jones & The Six.

The time period is fascinating too. The summit of hope of 67 and the avalanche in 68. The music around Utopia Avenue is iconic. Mitchell brings the era alive.

I would get back to writing my own, though Utopia Avenue will now always have it looking a little bit shoddy!