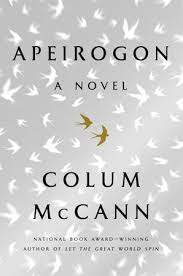 The crucial quotation in Colum McCann’s Booker Prize nominated Apeirogon is actually from Rumi - “Out beyond the ideas of wrong doing and right doing, there is a field. I will meet you there”.

In many ways that is what McCann does in this novel that is very much based on true stories but given fictional tweaks to bring it more alive. What he wants to bring alive are the feelings in the heart beyond the right and wrong. This is a novel made up of personal stories and though it is impossible to not brush up against the politics, it is not about the rights and wrongs of the Israeli/Palestine conflict.

It is about the hurt and the loss of young lives. It is about fathers who have to come to terms with that. It is about two men who forge their grief into a weapon for peace making.

Two fathers, one Palestinian, Bassam Aramin and the other Israeli, Rami Elhanan find each other.

Bassam’s ten year old daughter Abir is killed by a rubber bullet outside school, having just bought some sweets, “the lost expensive sweets in the world”. Rami’s fourteen year old daughter Smadar is blown up by a Palestinian suicide bomber shopping for the new school year, wearing a Blondie t-shirt and listening to Sinead O’Connor’s Nothing Compares To You in her headphones.

The book is about these four people. McCann brings Abir and Smadar alive. It is an amazing tribute to two girls who could easily have been just more statistics. Which of course is the point. The human suffering. The futile loss.

Even more so Bassam and Rami. These are ordinary men who’s accident of birth threw them into having to live through dehumanisation, injustice, inequality and deep deep pain of the heart. Yet, Bassam is a Palestinian who studies the holocaust. Rami is an Israeli who is against Israeli occupation. They now spend their lives telling their stories in schools, monasteries and to international groups. The hope is that the telling and listening to stories changes things. “Language was the sharpest weapon” They live and hope to lead others to Rumi’s field beyond right and wrong. I am reading another book on Palestine called The Other Side of The Wall by a Palestinian Presbyterian minister from Bethlehem called Munther Isaac  who in an early section explains how this piece of middle eastern land has been used as a battle ground for almost every Empires and nation of the world for centuries. It might seem a parochial story but in fact we are almost all complicit. It effects us all.

This is what Colum McCann’s genius conjures. The story of two men and their young murdered daughters almost detonates outwards and he shows us our complicity. Birds migrating through the middle east to side references to philosophers, psychologist, weapons designers and peace makers amongst so many others are woven into 10001 little chapters, based on 1001 Arabian Nights that Rami used to read Smadar before bed. It is a book of such a width and depth of ambition that only McCann at his best could conjure it.

Of course as I read I am thinking Belfast. Northern Ireland. McCann talks about this weird side taking where loyalists fly the Israeli flag and Republicans the Palestinian one. Bassam even gets to Belfast for a Conference, while studying in Bradford, and goes for an evening walk ending up in the Holylands of South Belfast where my Fitzroy congregation is located (I wonder if this bit is fact or fiction… I hope against hope).

For me the power of the telling of a story and then equally importantly  listening to another’s story is the key. There were lines that resonated with me for the work I do on the edges of peace making in Northern Ireland:

“In Palestine we say ignorance is a terrible acquaintance. We have no idea what the other is like. That where the madness lies”

“The lives poisoned with narrowness.What it might mean to understand the history of another.”

“He no longer wanted to fight. The greatest jihad, he said, was the ability to talk.”

“The hero makes a friend of his enemy.“

“… it’s a disaster to discover the humanity of your enemy, his nobility, because then he is not your enemy any more, he just can’t be.”

Emotions. Feelings. They are so important. They are more important than right and wrong or flags or borders or walls or all the things that caused the horrible unjust deaths of Abir and Smadar and the grief their parents have gone through ever since. They take you to Rumi’s field, a field that I would call  the Kingdom Of God.

The first time Colum McCann heard Bassam and Rami he was moved emotionally. Deeply. The brilliance of Apeirogon is how he makes you feel as you read their stories. As the meaning of the title, he has given the infinite sides of Israel/Palestine, the world beyond and our own hearts, souls and minds.

It is an astonishing book. I am not an avid reader outside of holiday times. As a result I never feel that I have the decadent joy to read a book twice. There are too many others on the shelf waiting. Apeirogon though is different. I am going to go through it again his autumn and winter. Slowly. Meditatively. Like a secular devotion alongs side my spiritual ones.