Home Archives Profile Subscribe
JULY 12 ON FITZROY TV - A SPIRITUAL CORONAVIRUS CHECK UP plus LIGHT IN U2
OFFERING THE SOIL OF OUR SOULS TO GOD - FITZROY PRAYER 12.7.2020

THANK YOU JACK CHARLTON FOR THE GLORIOUS JUNE of 1990 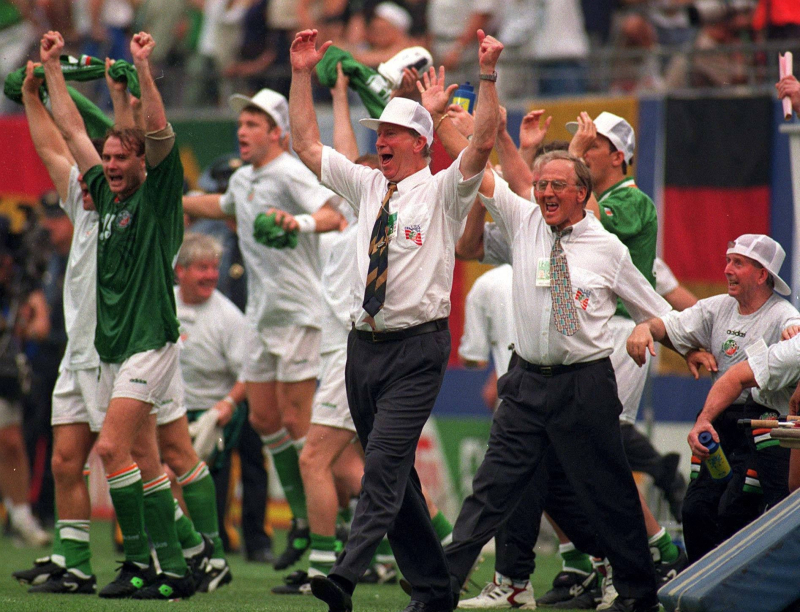 I think I was reading the Presbyterian Herald when I noticed my good friends David 'Monty' Montgomery and David Baldock asking for a back up driver for their sponsored Cycle Ride for the Lucan Youth Centre, a Presbyterian  Reconciliation Centre in Dublin. The cycle was from John O' Groats to Land's End. I was the assistant minister in First Antrim at the time with no holiday plans for that summer. I gave Monty a call and so began the trip of a lifetime.

Monty and David were hoping to take around 17 days to complete the trip and had scheduled the trip to have days off for the Republic of Ireland's World Cup games! Jack Charlton had transformed the Republic's football fortunes. When I was a boy they were bottom of every World Cup qualifying group. There were political, probably sectarian reasons. Young Irish boys were discouraged from playing soccer which was seen as English and encouraged to stick with Gaelic football and hurling.

Jack loosened that grip with success and probably completed the transformation with a 1-0 win over England in the 1988 European Championships! Jack went one further and charmed almost the entire island into supporting the Republic. Almost, because of course there are many in Northern Ireland who hate the republic with a passion but it should n't be lost in this blog that Monty and I are northern Irish Protestants. I noticed many northern Protestants like us posting fond Jack Charlton posts today.

Back to our Cycle Ride. The David's had some work to do peddling that bike and were joined through Scotland with the good company of Kristie Franck. My job was to go on ahead find a suitable spot for lunch and catch buy the papers to keep up with World Cup news.

On our way north to John O'Groats we stopped in to watch the game against England. This was a strong English team who in the end should have made the final but lost on penalties to West Germany. Linekar scored early but the Republic hung in. Literally at the moment Monty suggested that Sheedy should be substituted Sheedy swung his leg and 1-1! Great opening result.

The next game was during a stop over in Stirling where Monty went to University. The problem was finding somewhere to watch it. We found a TV in someone's house just in time and watched a boring scoreless draw. The third game was worst of all. Coming over from Dublin we hadn't allowed for the fact that we had to watch England against Egypt. We were by then in St. Thomas's in Lancaster. So that was a long game, watching updates on the screen. Monty just questioned Nial Quinn's inclusion when... according to script it came up that he had equalised Gullitt's opener for Holland. Three draws and we were in the last 16!

For that game we had to find time on a bike day. Monty and Dave hadn't reckoned on needing another day off. I drove ahead. I was struggling. It was an afternoon game. Finally a pub in Cullompton. Where? I'll never forget it. Monty again was crucial to the drama. When Jack Charlton brought on David O'Leary in extra time Monty quipped "he's hardly on for the penalty shoot-out!" O'Leary of course scored the winning penalty that had us creaming and dancing all around a pub that had only us in it. I wonder if on hearing of Jack Charlton's death if that barman said to his children, "You know he managed the Republic Of Ireland and one day in 1990 this very wee Irishman man and this very tall Irishman man..."

It all ended in the Quarter Finals against the hosts Italy but what a bike ride that was. The Republic did it again in 1994 by which time I was living in Dublin and they beat Italy to again reach the last 16. It wasn't just as good as the bike ride but those were glory days.

Jack Charlton made it all happen. He had the whole of Ireland taking days off work and dancing in the streets. He took a bulldozer to the old nonsense that soccer was an English game. He raised expectations, He lifted a country's sense of itself. It is too much to say that along with a rock band called U2 he put a wee country on the world map... but just maybe he contributed to the Celtic Tiger about to descend.

Whatever, when Janice told me the sad news of Jack's death this morning, I was back in Cullompton, revelling in it. Thank you Jack for the utter joy.

Liking where U2’s songs can orient us to in our walk, walking on. Staying in the sound, finding grace inside the sound … recalling the repeat of ‘Let me in the Sound’ within ‘Get On Your Boots’ then wondering about this song being some of what may be needed coming out of Quarantine. Lament and a light leading us through lament – I hadn’t considered on a broader scale that we can engage in lament through music (rock music), within a community of listeners and be pastored through the release of fear, our missteps, doubt, anger, guilt, sadness; on a smaller scale I hadn’t considered lament to be something that we engage in in letting go of the day (and again, perhaps through music). But, musicians can gather, move, elevate and encourage us at times in the process of lament. Songs sung can align with us. We can agree with them. We can move forward with them. We can find light in them. Lament becomes about not letting go of the light. The narrative within the vevo video of U2’s ‘Song for Someone’ with Woody Harrelson and daughter Zoe seems to be about moving to the other side of lament and the grace involved in taking new next steps. Always liking Frederick Buechner’s quote … “Your vocation in life is where your greatest joy meets the world's greatest need.” A good kick in the pants some days for the truth it holds. A lot is here to mine and chew on. My gratitude for this vlog, Steve. Thank you to Jonny, Peter, Caroline, Shannon, Danny, Colin and Alison for the vocation you are engaging in. Good, good.