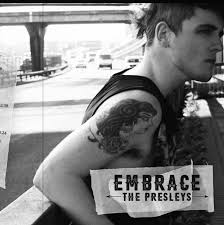 A few weeks ago an album sneaked out onto all streaming platforms by a band called The Presleys. You might have missed it.

It is an album of modern blues, edgy in sound and content. It all has a contemporary urban garage band sounding rock strut. At a time when the streets of America are full of tension and Coronavirus is a shadow across our world the music on Embrace sounds imperfectly perfect.

If you look closer, the main man on the record is none other than Belfast songwriter Brian Houston. The songs were birthed in North Carolina as part of a charity project. It is nothing like Brian has ever done before, a welcome new iron in his talented fire, the spontaneous work of an artist discovering a fresh and fertile field.

I was so fascinated by its origins, intentions and place in the Brian Houston catalogue that I spent a happy evening going back and forward with Brian on Facebook to find out who the Presleys are and how Embrace came about.

So, who are The Presleys?

The Presleys is a construct. It started life as me and my friend Ned. But he suffered a couple of bereavements back to back in the middle other issues and decided he was better out of it. So now it’s one of my alter egos.

We'll get to your alter ego in a minute. tell me how working with ned gave them direction of the record it's initial impetus. What did he bring?

We had agreed to do some live streaming from a house the Charity was renting to help raise funds for their cause. The charity was called Embrace. Hence the name of the album.

Ned and I drove there the first day discussing if we should play worship songs or covers of classic tunes. We had no clue what to do.

We set up the gear. Just Ned on drums and me on electric guitar. I played a couple of chords and Ned jammed along. Next thing we knew I’d written a song called I Can Feel The Rain because the shack we were in had a tin roof and we could hear the rain beating hard on it. We recorded the song on our phones and rehearsed it a few more times then went live on FB. We packed up and went home.

It took Ned by surprise that it happened so easily and quickly. He asked me if that counted as a co-write and I explained the mechanics of songwriting.

I wrote another the next day and Ned was shocked by the speed of it. It motivated him to be much more forward with his ideas.

Soon he was throwing in as many ideas as me. Rhythm ideas, tempo changes, lyric ideas and melody ideas.

When we had done about eight or ten live Facebook posts we called it a day.

The songs were recorded on our phones and we didn’t look at them again until Ned came to Belfast and we started recording.

The song Gun Store was Neds idea. He made it up as a joke but to me it sounded like a hit so we worked at it until it had structure and melody. It was finished we thought then we came up with the idea of adding a rap. Ned has a friend in Raleigh who recorded his rap and sent it to me to put in the song.

So. working with Ned gave you an other avenue to go down. Did he give you the chance to do something you always wanted to or did you find something you'd never thought of doing?

The fact that Ned and I have been friends for 7 years and we’re completely comfortable playing together meant there was no pressure. He is very good at just rolling with what ever I try or wherever I go.

There was no expectation nor agenda so in someways the place we were in and the stories we were hearing about homeless people first hand were all feeding my imagination. I actually woke up with the whole of Poor in America in my head. That rarely happens. But the creative juices were just flowing with no egos in the way.

I think the fact that Ned was a relative novice when it came to writing and recording meant that he was enjoying the exploring as much as me.

When you come from Belfast and you’re in a ghetto in Durham NC and you’re seeing the poverty and the people up close it’s very a powerful stimulus.

Also I hadn’t used a Gibson SG guitar before and it was definitely influencing the style of music and taking it in a bluesy direction. And probably the fact that we only asked one song of ourselves each day, one performance, one video, meant that we could spend all day writing and rehearsing then broadcast it and forget about it. The next day was a fresh start.

There certainly is an American feel about the sound  and the content of the songs. Was that easier for a Belfast boy to sing about under The Presleys moniker?

The name was the last thing to come. For a long time we called it the “NED” project. It was Ned’s mom who suggested the Presleys.

I really felt we could push into blues and rock unselfconsciously because it wasn’t a Brian Houston project.

To be able to find that childlike freedom to do what I felt like without worrying about what it said about my career, was a tremendous adrenalin shot in the arm.

The Presleys? No risks of Lisa Marie suing?

Wouldn’t that be an amazing piece of publicity.

So, any other projects pending?