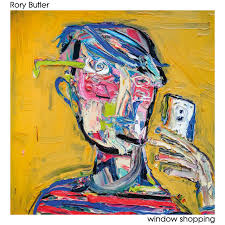 Listening to Rory Butler’s debut album Window Shopping, I couldn’t help but think that he has been influenced by his influencers influencers.

Let me explain. When Rory Butler was about 3 or 4 I spent a little time in his house. I was amateurishly managing Iain Archer at the time and had convinced Rory’s dad Steve and music business partners that they needed to release Iain’s first album. They had a house in Dalry, Ayrshire with a studio in the basement.

Sticky Music eventually released two Iain Archer records, Playing Dead and Crazy Bird. As those were recorded Rory took a shine to “Archie” as he called him. It is a relationship that continued. I watched as a twelve year old Rory played live with Iain at the Greenbelt Festival.

Butler’s debut album has many of the hallmarks of those two Archer records particularly the more acoustic Crazy Bird. Butler has the same guitar playing fretboard dancing style as Archer. It is mesmerising and thankfully disciplined enough to not clutter up the songs.

I did say though that Butler was more influenced by Archer’s influencers. I remember first meeting Iain Archer and being captivated by his versions of John Martyn’s Over the Hill and May You Never. He actually released the latter as an extra track on his first Sticky Music single Wishing. We eventually got Archer on a John Martyn tour.

Rory Butler’s voice has that laid back languishing vocal style of John Martyn and of course he is also Scottish. Though I liken it to Martyn to leave it there would be an injustice. It is Butler’s very own voice and it draws you in with a warmth, an intimacy and that accent adds authenticity.

The other influence of an influence is his dad’s love of Jackson Browne. Rory’s dad Steve fronted early 90s band Lies Damned Lies that had a brief spell signed to Siren Records back in the day. They continued to make albums of utter tastefulness in that studio that Rory toddled about in.

Steve Butler made a few solo records too and Jackson Browne can very much be heard in their DNA. Where Rory is channeling his dad’s Jackson influence is in the content of the songs. Rory doesn’t sing so much Browne’s introspection as his social critique of his times.

Window Shopping is to the generations 20-somethings what The Pretender was for that age group the mid 70s. The title track does seems autobiographical. Introducing it a while back at a SoFar gig Rory spoke about moving from Edinburgh to London to become a musician and ending up a Vegan Barista, working in a cafe “underpaid and over qualified.” It is personal but no Late For The Sky.

A quick study of Cameron Watt’s evocative album cover reveals that the influence of smart phones and screen time is very much on Butler’s mind. Mind Your Business is about “living on line… every single second on it”. He’s questioning a world that “makes you feel good when you’re on display.”

On the other side of the story Butler realises that social media has been the source of wake up calls for social justice across the world. This Side Of the World was inspired by the the photo of that Syrian child refugee washed up on a Mediterranean beach. That we cannot get “in” to the world that so much of our world lives through. Powerful song.

Tell Yourself is the antithesis of screen addiction and social media. A song about friendship being the best source of residence and self worth.

This record is a refreshing piece of work. Reviews are labelling it folk. I can see why with the finger picking acoustic foundation and Martyn-esque flair but that would be a lazy pigeon hole for an album of contemporary reporting with a contemporary vitality and urgency. It is so much deeper than Ed, George or Sam. It is so good.