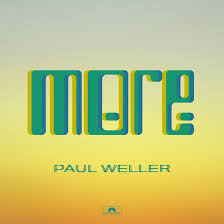 Paul Weller’s new album On Sunset might not be as sonic shifting as some recent albums. Don’t however be as lazy as some reviewers and think for a minute it is not experimental. It is Weller doing his best Curtis Mayfield, an influence surely hinted in his work since at The Gift in 1982, and there are sprinklings of Beatles’ stardust all across it.

Actually it is more than a little bit Michael Kiwanuka. The careful and clever use of instruments. Hannah Peel’s strings so evident in True Meanings, horns, old mate Mick Talbot’s hammond organ and even Slade’s Jim Lea’s violin. The grooves, the psychedelia, near music hall. All full of soul - Baptiste gets almost spiritual about it!

Best of all for me is the song More. Weller might not be fully aware of how Jesus-like this song’s sermon is. I preached in Fitzroy recently about Jesus idea that where your treasure is your heart will be also. It is in Jesus’ Sermon on the Mount and he is talking about treasure in general, how God and money is a constant battle and how we shouldn’t be obsessed with treasure on earth.

Jesus could have put it another way. The Paul Weller way:

When all is more, it's more we choose

There's always something else in store

To an unknown place I think is more

The addiction for more seems a modern ailment. Jesus obviously felt that it was a problem in his day too though he might have been talking about the religious leaders of his day who had done financial deals with Herod and the Roman occupiers.

I actually think that this teaching of Jesus makes this past of the Bible even more relevant than it was when it was written. Jesus followers didn’t have much treasure to store!

Paul Weller puts it beautifully though and I was sorry I forgot to quote it in that ‘treasure’ sermon. Lyrically brilliant. Spiritually, right on it!