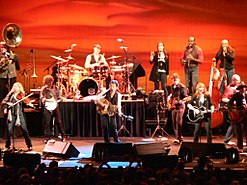 We’ve got more used to Church in rock arena. U2 have been bringing hymn-like anthems into rock n roll concerts for over twenty five years, though much more noticeably since the Elevation Tour five years ago. Tonight, though, Bruce Springsteen took "Christian" music in the rock arena up a whole other notch.

This is a very specific project that Springsteen is on. Having drawn a band together to do a song on a Pete Seeger tribute album, he then brought them back for an album. Now he has them on the road and the “happy accident” that he called it tonight is a lucky chance beyond coincidence; it could have been conjured up in heaven.

A four piece eccentric horn section, two far out fiddlers, a banjo player who thinks he’s Jimi Hendrix, a piano/accordian player who adds all kinds of honky-tonk and Cajun tinkles and great vocalists arranged by Patti. An experience unique and wonderful.

The only glitch and it was a big one in itself though luckily never taints outside its own little disaster bubble. To fill out the set to the length that Springsteen fans have become use to, Bruce adds a few of his own songs. Oh dear. I mean, oh dear, dear, dear!

Apart from City Of Ruins, a song that fits snuggly into the spiritual hopefulness amidst American tragedy and How Can A Poor Man Stand Such Times As These written by Blind Alfred Reed then covered by Ry Cooder before Bruce wrote three new verses for a Katrina Hurricane Fund Raiser that fits for similar reasons his other choices were awful and then done even more badly.

You Can Look But You Better Not Touch was no great melody anyway and loses anything it had entirely, Open All Night is awful and Adam Raised a Cain even worse. There must have been other things that would have fitted this musical context but Bruce didn’t pick them.

The good ones however are better than good and finds Springsteen pointing those songs towards New Orleans. Having recently played there and seen the devastation for himself Springsteen mentions twice that no one ever thought how the displacement of people during the thirties dustbowl could happen in again in America; but it has. That people should be driven from their homes and just left where it stops is an indictment on a nation. A brief mention of the immigrant issue tells you that his hoe down, knees up is not without serious clout.

But it was the spiritual that set the night apart. The Seeger Sessions brought four old negro spirituals via the civil rights movement into the Springsteen canon. This is Springsteen at his most explicitly Biblical. The programme notes, researched by Bruce biographer and all round serious rock journalist Dave Marsh, reads like Bible notes with verses from Genesis, Exodus, The Gospel According To John, Acts and 1 Corinthians all expounded.

Before Jacob's Ladder Bruce even does his own Biblical commentary saying that because he was playing a song about Jacob he thought he better investigate him. He found him to be a “F*** up… who somehow found his way into the grace of God.” It couldn’t be more accurate. Bruce is preaching it!

Where I found these spirituals set apart from the worship music being played in most of our churches is the authenticity of the experience and the hymns. These are songs of belief at the sharp end of need. It is something of what Jesus meant when he said the poor were blessed.

The people who find a passionate belief in hope are the people who have nothing else to believe in. The problem with white western middle class church worship is that we have so much other than God to believe in and our hope is caught up in all the fashion labels, gadgets and hedonistic leisure of our spoiled geographical fate. Wealth blunts need and therefore dependence upon God The soul gets pampered in cotton wool and loses its fire.

The worship that is being written for the Church will always struggle to express faith or hope or commitment or salvation when the need for all of those things is not acute. Faith is no longer a daily survival prayer but a label of identity almost as shallow as those of high street fashion. Springsteen is tapping into something much deeper and richer. Here are the songs of desperation but in negro spirituals those kind of songs are always uplifting and celebratory, the escape is so firmly believed in that they are celebrating it before it comes which ignites their strength for the fight in between.

"Spirit" and "soul" words are Church words and yet here is Bruce Springsteen in a rock venue showing the Church the way. The Church plays music. Bring the music books and rehearse well; get it meticulously right. There can be a danger that a Church full of musicians of high ability and no shortage of qualifications miss out on the soul and spirit of music making with danger and risk. Tonight we had a band on the edge of fun and joy and cause. It threw another hue across the Springsteen story. It might even prove one of his happiest and most spiritual accidents.