Home Archives Profile Subscribe
OFFERING THE SOIL OF OUR SOULS TO GOD - FITZROY PRAYER 12.7.2020
PAUL WELLER'S SERMON ON THE MOUNT MOMENT ON HIS NEW ALBUM ON SUNSET

35th ANNIVERSARY OF LIVE AID - HOW IT CHANGED MY LIFE 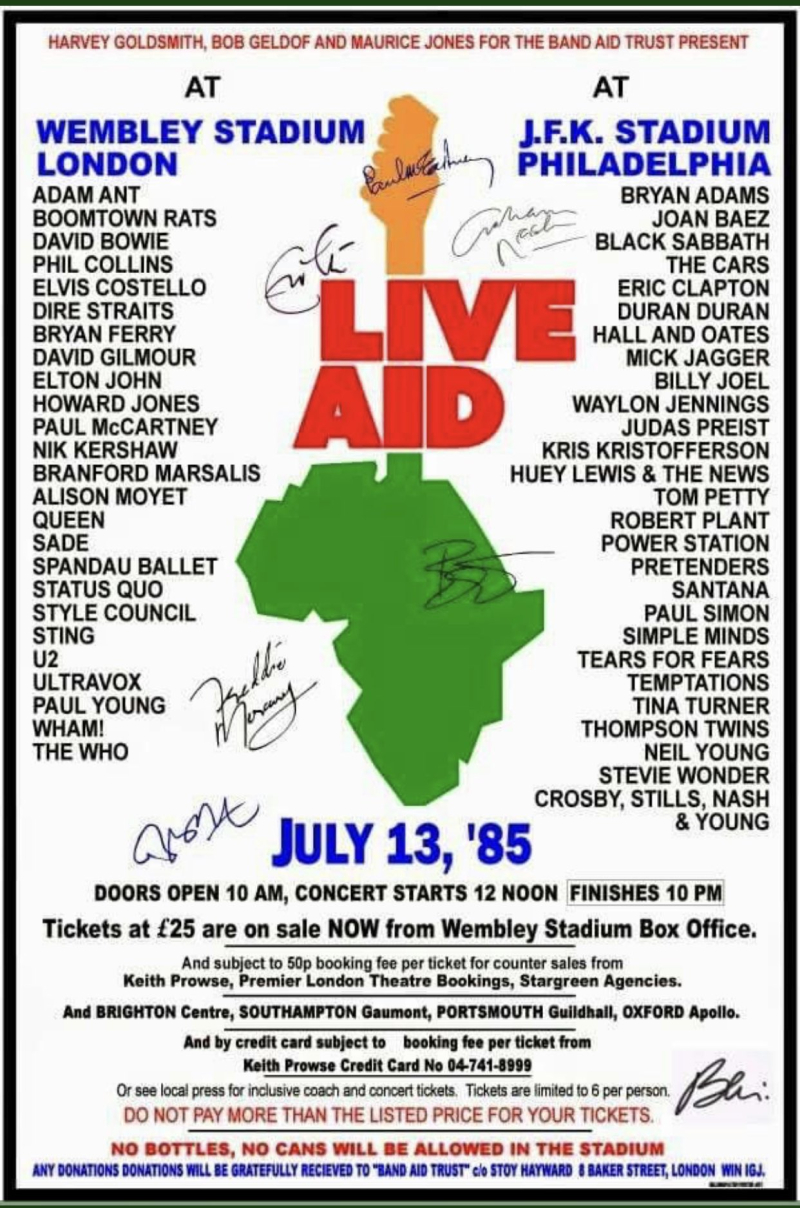 In the summer term of 1986 I was reading two books. One was John Stott’s Issues Facing Christians Today and the other was Bob Geldof’s autobiography Is That Is? The next thirty four years of my following Jesus and ministry took a huge leap off Stott and Geldof coming together.

Like most Northern Irish evangelicals of that era I was well ensconced in a vertical relationship with God. It was very one dimensional. I was a sinner and Jesus had arrived to save me. It was all about me and God. Thankfully it was all sorted and I could “read my Bible and pray every day if I wanted to grow” as the chorus put it.

Now I was never satisfied settling for the vertical alone. I had come to faith in Jesus because I genuinely believed that he answered the questions that John Lennon had raised in my life. Now Lennon and The Beatles were asking horizontal questions about peace when I was living in a country that was anything but at peace. I was interested in how “love your neighbour” and indeed “love your enemies” applied to the streets around me. I preached on that too and got into a little bother. Bother that confused me.

Anyway, Bob Geldof extended my horizontal vision with the Live Aid concerts of July 13, 1985. Of course it began with the Band Aid single the Christmas before. Doing something for starving children in Africa sounded to me like a Jesus thing. Yet, as Geldof was mobilising I didn’t see the same compassion or rage in the Churches around me. It seemed we just let it happen. Maybe we prayed!

I read in the Gospels about how you would know followers of Jesus by how they cared for the least of these (Matthew 25) and this Dublin punk’s first single raged, “Don't give me love thy neighbour/Don’t give me charity/Don’t give me peace and love or the good lord above/You only get in my way with your stupid ideas”.

I wondered if God was embarrassing the Church by choosing the most unlikely to do the work we should be doing. Geldof actually said as much in that memoir a year or two later, “God looked down and looked for the least likely…”

Anyway, Live Aid lit my passion and compassion and vision. I loved the entire day. I started by listening on the radio, with my buddy Richard Ross, as Status Quo set it all off at mid day. We were in a school playground in Portrush, preparing for the start of the CSSM beach mission the next day. I then headed home and watched on TV until 4am when I went to bed before getting up to preach in Ballykeel Presbyterian at 10am! I used Live Aid to influence my prayers!

Oh I loved U2. Dire Straits and Sting were wonderful. Elton John was all celebratory - Saturday night’s alright for saving the world. Bowie was at his Rebel Rebel best. I even enjoyed Queen a band I lost love for shortly after I really loved Bohemian Rhapsody. There was that video to The Cars' Drive and the cry of that little child. I’ll always be frustrated about Paul McCartney’s faulty microphone and Dylan’s set in Philadelphia was shambolic but closing Wembley with Do They Know It’s Christmas was emotional even on a hot July night! Emotional and inspirational!

Certainly that day set my feet on a journey that of course eventually landed in Africa. It is not lost on me that today on the 35th anniversary I should actually be in Africa but for Coronavirus. My faith went horizontal without losing any of the vertical.

I did of course discover Christian Aid and Tear Fund were doing such work. However, in general I believe that these organisations also got an impetus from Geldof’s work. I hear them now suggest that big events are not as useful long term, the return perhaps not worth the investment. Well when I think of the hundreds of people that I have now taken to Africa many of whom now work full-time or part time for such projects and most of whom live with a good eye on the horizontal then I plead not to lose the big events. They fire imaginations like mine and the impact cannot be easily  quantified.

So that summer term of ‘86? Well, I had not so much studying to do. Others were revising. I was done. I read Geldof’s book and it reignited my passion. Stott’s book theologised it. I had the Bible open at Amos! John Stott, one of Christianity’s top thinkers of the 20th century actually stated in the Lausanne Covenant of 1974 that the greatest evangelical heresy of that century was the lack of social justice. My response to Live Aid wasn’t wrong. I was right to go horizontal.

Thankfully evangelicalism has spent the last forty years finding a better Biblical balance of the horizontal and the vertical. For me, most of my vocation of my “deepest gladness, meeting the world’s deepest need (Fredrick Buechner)” springs from July 13th 1985. Today I am looking back fondly, giving thanks to God for where the journey took me and to Bob Geldof for his response to pictures of famine on his TV news… maybe God really did look down and seek you out Bob!