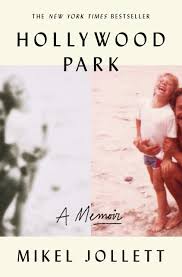 Mikel Jollett. Taken from his parents in the Californian Synanon Cult and raised pretty much as an orphan, escaping with his mentally unstable mother, living with her alcoholic step fathers, childhood poverty that meant raising and killing rabbits for food, finding love and worth from his father a former alcoholic and prisoner, discovering education and graduating from Stanford, becoming a journalist and interviewing his heroes David Bowie and Robert Smith before finally becoming the frontman with acclaimed indie band The Airborne Toxic Event.

Around that story Jollett writes about his inner being, the pain, the void and the masks he had to wear. It is a mature human being self critiquing, being honest with his numbness and inability to love.

Jollett also seems intent in writing a near tribute to his father, a man who grew up with flaws but who gave him encouragement and love. There is almost a sense that the two men grew psychologically together. His dad’s loss at the end of the book is as heavy on Jollett as the orphan ways of the cult he grew up in.

All of this is written in the most lyrical of ways. Words and music has been the key to Jollett’s redemption, discovering books, then his ability to write, his job as a rock journalist to his desire to write a novel but ending up writing songs. He is gifted with words.

His ability to set you into houses and onto street and into classrooms onto beaches. His memory is so vivid and his genius at finding images and words. He writes in the voice of a child, then an adolescent, then a man.

As I glance across a book that you can tell that I loved I am drawn to passages where he expresses grief, mental illness, emptiness inside as well as the elation of winning mile races, writing songs and the euphoria of being on a stage and relating to a crowd that understands.

It is a book that looks deep into the brokenness of humanity and journeys with a human being who has traversed the worst of that brokenness and found at least some repair in the love and purpose of his life in his mid 40s.

Hollywood Park is an achievement as a memoir as is the life it catalogues. Jollett is a fresh talent in the world of books. He has of course been an acclaimed songwriter for a decade and there is a record to go with the book.

The Airborne Toxic Event are west coast indie working in the discipline of melancholy with edgy guitars, noisy feedback, Springsteen-esque passion and beguiling hooks. Jollett commands it all with a strong voice and lyrics that lace the feelings that the music evokes. The accompanying record Hollywood Park might be the band’s most fulfilled work to date. It will be up there on Album of the Year lists.

Did I say astonishing.