Home Archives Profile Subscribe
THE NEXT TWO SUNDAYS IN FITZROY - JUNE 14 & 21, 2020
IN THE KING'S HALL SUN (for Glenn Jordan) 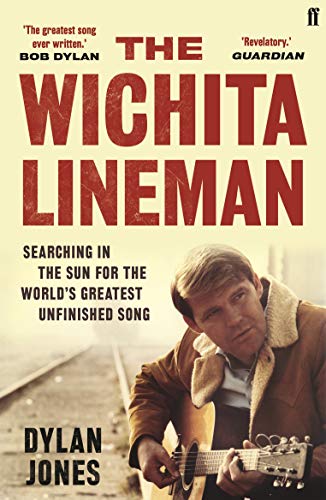 An entire book on one single song. I was suspicious. I am, however, a Jimmy Webb fan and this is a Jimmy Webb song. Not my favourite. That has always been By The Time I Get To Phoenix but it was worth a try.

And it was worth the try. Oh, I did spin d too many pages in the Oklahoma panhandle gazing down long long straight roads with telegraph poles the only thing above flat but Jones fills a book well and not much of it was wasted.

There were biographies of both Jimmy Webb and Glen Campbell and a real sense of the American music moment that Witchita Lineman arrived in. The stars. The session players. The inustry. Los Angeles. Campbell’s guitar prowess as well as his vocal abilities are well documented. How many songs did that man play on? I hadn’t realised that he was a bigger feeling act than The Beatles in 1968.

The Jimmy Webb stuff is obviously my favourite and Jones’ time with Webb in a Sea Food restaurant on Long Island is wonderful stuff, giving clues to the writing of this song and others as well as his relationship with Glen Campbell and much more. I found this more insightful even than Webb’s own book A Cake In The Rain.

Of course most of all there is the song. Oh my does Dylan Jones make you fall in love with that song. It wasn’t really finished but that made it. It’s lonesomeness. The spaciousness. The morse code coda. And that amazing refrain: “And I need you more than want you and I want you for all time.”

Now, I was not not a fan of The Wichita Lineman but having spent three weeks reading about it and singing that refrain over and over. How did I miss its wonder?

Most of all, I couldn’t help but remember a journey across Colorado and Kansas in 1993. We had been driving in the Rockies and the desert. Fascinating scenery. When me and my mates, Dave and Dave, were leaving Denver we were told to prepare for boredom. We thought that driving through the flatness of the prairies would be another fascinating scene.

After six hours on a straight highway, a few miles per hour above the speed limit, on cruise control and me and the two Dave’s were bored out of our heads, seeking solace in Shawn Colvin’s new record of the time Fat City. We saw those telegraph wires. Why oh why were we not on to the The Wichita Lineman. It would have been perfect. The song almost is.