U2: NO LINE ON THE HORIZON - #9 Ten Albums Reviewed More Than 10 Years Ago 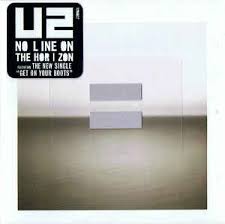 (My series of albums that I reviewed more than 10 years ago finds its way to U2. At a 4 Corners Festival planning meeting today Jim Deeds mentioned U2's song Breathe, from this very record. Is it hard to believe that the lyrics say "Sixteen of June, Chinese stocks are going up/And I'm coming down with some new Asian virus/Ju Ju man, Ju Ju man/Doc says you're fine, or dying…" Oh my!

No Line On The Horizon didn't pass the test of time. I am not sure how fair that is. Some songs perhaps got lost in the over critical hype. Maybe its time to re-investigate...)

First listens to new albums are all about judgements. The surprising thing about this, the most eagerly anticipated eleventh studio album by U2, is that it caused my first judgement to be not about the the album itself but on U2’s previous two releases. In the light of No Line On The Horizon, How To Dismantle An Atomic Bomb and All That You Can’t Leave Behind must feel a little insecure, frail and vulnerable. They were good albums with many songs that will pepper U2 concerts for many years to come BUT alongside the jury made up of the songs on this new album they are found wanting; good but no longer great. The initial judgement of NLOTH is that it is indeed great. Many spoke of ATYCLB being the third great U2 album but actually it actually it might just have arrived now, though time, and hearing these songs in the live context, will tell. NLOTH is, for sure, a much more carefully crafted, mature, fulfilled work of art.

Taking that extra time between albums, the longest gap in U2 history, and feeling their way towards an album rather than chasing deadline day mixes has all been worth it. Bringing in Brian Eno and Daniel Lanois, their producers and musical mentors for twenty five years, as co-creators this time has also added sonic breadth, width and depth. What the six creators have finally presented to the world is an album of various shades and atmospheric shifts, big big riffs to move the body and sparse reflectives to caress the soul. Edge, Adam and Larry have rarely played better and Bono’s lyrics and voice show another level of maturity. Lanois and Eno then add loops and left field lateral thinking that brings a treasure trove of slow burn layered melodic wonder.

Every U2 phase gets a name check... the worship of the youthfully exuberant October is back on Magnificent which finally kicks in to a Unforgettable Fire soundscape... while Fez - Being Born has a Passengers mood... Stand Up Comedy is the girder crunch chords of Achtung Baby... the lyric of Unknown Caller would sit well on Zooropa... Cedars Of Lebanon is like one of those great Joshua Tree soft spoken word poem out-takes that finally got their recognition on that album’s Twentieth Anniversary Edition. I’ll Go Crazy If I Don’t Go Crazy Tonight would have sat nicely on the last two albums but as highlighted in the unsettling sound of the lead-off single Get On Your Boots it is all wrapped up in fresh experimental recycling. Having suggested familiarity there are many tracks and sections of tracks that if played without vocal would not reveal the band’s identity at all. Moment of Surrender is such a song; seven minutes of spiritual journey where the Edge actually plays a solo from David Gilmour’s guitar school. The mixing the U2 sound with that which isn’t gives more twists and surprises than we have heard for awhile.

A Twitter friend asked for a one word review to which I wrote Theological. We have gotten used, some of us excited, about Bono’s declarations of faith over thirty years but there is enough theology on NLOTH to set up a Seminary! As the lyrics are more thought through so is the theological undercurrent to songs where God is rarely in the headline but omnipresent in the story. Since How To Dismantle An Atomic Bomb I have come to regard Bono as a theologian and here is more evidence of his contribution to helping us navigate us through the uncertainty of the post modern age with assurances that grace is all that we need because grace is all that we have. With U2 there is an absence of dogmatic arrogance but always a humble strength of belief, a constant of confession and the discernment to thus “everyday I die again and every day I’m born again” and that it’s “Not that I believe in love but that love believes in me.”

What U2 do is believe in spite of the evidence and believe that the evidence will change to almost quote, one of Bono’s social justice allies, Jim Wallis. In U2 songs we are not about hanging around waiting for some better day way down the line or denying the bad news that is strewn across the newspapers today. U2’s religion is not an opiate as Marx might have accused Bono had they both found themselves as a team fighting poverty in the same era. Instead it kisses the future while holding its arms out to the world on the street. It believes that reaching the light is certain even though it is a mountain to climb. The songs on NLOTH shimmy and shift between the reality of war and the worship of God; there are couplets of doubt alongside convictions of hope.

It could be that U2 from north Dublin are the natural successors to the negro slaves who wrote those amazing spirituals on the plantations of America’s southern states. Obviously I am not thinking of Edge’s guitar sound but the spirit of the songs and the theology that underpins. A careful look at the spirituals will reveal that the belief in what will happen in the next life directly impacts the present one. The belief is that redemption is already here and at the same time still yet to come. So if we believe that “we’re going to make it all the way to the light” then don’t just sit around waiting but fuelled by such a belief we might find ourselves at times “lost between the darkness and the dawning” but we can “shout at the darkness, squeeze out the sparks of light.” This album is a journey through that hinterland and the horizon is blurred with no demarcation line. Time is not linear and we are not to look for the visibility of the evidence around us but a vision of how it is going to be. If you are on such a spiritual pilgrimage then here are more songs of worship and catharsis.

Maybe one of the challenges to U2 about this album is that the music world has changed again since their last release. There is a credit crunch and the download has broken up the world of the LP. It could be that in years to come this might be considered one of their fullest works but not their biggest seller. So will U2 really be content with making art rather than the top of the charts? I hope so. Those with ears to hear need a whole dose more of this!

Wow this is a really great review.

Thanks Steve, on focussing again on this beautiful album! Especially in this period. We all have to dig deeper these times, and with such a theological album as this one it shows us the processes of life. Birth and rebirth. From doubt to hope is a long way, but U2 really processes well in this. For those U2 fans who really wants to dig deeper this album is a must. In our U2 retreat and app group we used NLOTH in our prayer times (music and lyrics). I was not aware of the actuality of the lyrics of Breathe!! I'm happy that I watched 360 and a lot of the songs of this album live. They came alive to me, especially Unknown Caller. Thanks again, Steve, really appreciated! Jan Vierhout