Home Archives Profile Subscribe
GOD? WHERE HE HAS ALWAYS BEEN...
A PSALM AT THE GRAND CANYON - CORONAVIRUS ESCAPES #11

FROM A DISTANCE... (THE SONG WITH "AWFUL THEOLOGY") 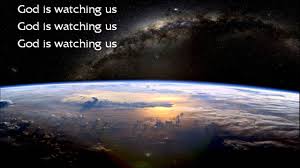 Using the word "distance" so much in the context of social distancing, during these Coronavirus Times, this song came to mind.

From A Distance became a bit of anthem at the end of the 80s. Bette Midler actually won a Grammy with it, in 1991. recorded it. Cliff Richard covered it too!

It was actually written by American songwriter Julie Gold and first recorded by Nanci Griffith who recorded a few of Gold's songs.

When it was released as a single by Griffiths in 1987 Ricky Ross was a guest singles reviewer one month in Scottish music paper Cut. I remember him dismissing it not for the craft but for the "awful theology".

It has taken my 33 years to finally take that "awful theology" on. I have been obsessed pastorally this past week with how God smashed all the distance between a Holy God and humanity, once at enmity with that Holiness.

Jesus wore our humanity, nailed the cause of enmity, tore the veil to the Holy of Holies, rolled away the stone of the separation of death.

“I live in a high and holy place,
but also with the one who is contrite and lowly in spirit,
to revive the spirit of the lowly
and to revive the heart of the contrite.

"The Word became flesh and made his dwelling among us."

So apologies to Julie and Nanci for using you as a way in to a wonderful truth for these times...

FROM A DISTANCE (MY RESPONSE)

Nanci, it was such a nice song

"God is watching us"

But no song ever got it more wrong

Nanci, no one needs to hear this

"God is watching us"

But from the most intimate space of nearness.