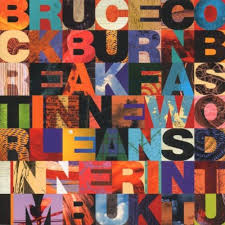 The last in my series of Ten Albums Reviewed Over Ten Years Ago... My fav Cockburn album of the era...my original review...

The first track on Bruce Cockburn's new album is perhaps a good place to find the clues as to what this Canadian singer songwriter's career has been all about. There are lines of travelogue, as our hero enters the streets of what might be a foreign city (it usually is), there are the lines of social and political observation and the whole thing adds up to be being about this guy overwhelmed with the pace and clammer of the world around him and trying to find some sense. The last thing is that in the midst of all the poetic genius and lyrical provocation and illumination Cockburn is dying to make his contribution.

"Breakfast...Dinner..." is a very poetic piece with a couple of instrumentals and a cover version thrown in. So poetic indeed that many of the 8 original lyrics are spoken rather than sung though there is always a melodic chorus on which Cockburn is accompnaied by female vocalists - Lucinda Williams and Margo Timmins (Cowboy Junkies). It does leave me thinking that when I am introducing friends to the wonders of this genius's work that this will not be the album to start at. However, for those of us who are fans it is a perfect fulfilling of the potential that began with his return from the major label to his own independence on Charity Of Night.

That is not to say that the album is musically opaque. It is pleasantly bouyant stroll of a CD that has been influenced again by Cockburn's interest in world music discovered on his varied travels. This is best evidenced in the contibution Daniel Janke's kora playing. The kora is a 21 stringed African harp lute. Percussion is subtle but fascinating and of course Cockburn's guitar playing is virtuoso. Indeed on the Rykodisc website Cockburn tells us that the introduction of the kora effected the music written especially the rather sexually explicit "Mango".

Cockburn's poetic lyrics are well known and some of this album is as good as he's ever been. "Isn't That What Friends Are For" is a gem. As Bruce once sang ten years ago on "Don't Feel Your Touch", "to be held in the hand sof a friend is to be a king". After the obligatory and brilliant word picture of forest in an autumn sky, Cockburn makes observations huimanity's seeming insignificance: "Towering blades of grass/Glimpse only sometimes the amazing breadth of heaven". His last verse is powerfully poignant making you wish that you had a friend like this. He shaves and rolls up the ration of light he has and blows it "against those moments when the darkness blows under your door". Goose bumps!

Musical anoraks might see a couple of links to the last U2 album Pop. The Dublin band are friends of Cockburn and have confessed their admiaration, quoting him in God Part 2. Here their fellow faith pilgrim uses an almost identical song title "Last Night On Earth" and the chorus of the Pop version is "give it away" very similar to the opening track here. Cockburn's song, titled Last Night Of The World, he has explained is about refugees he met in Mexico whose dignity in their hopeless poverty makes our complaining a decadent obscenity. While introducing the song at Greenbelt he spoke of being on tour with Sam Phillips. One of the band carried a bag everywhere he went. When asked what it was for, he replied it was in case of the apocalypse at which point Phillips asked, what else you would need apart from two glasses and a bottle of champagne????!!!!!!!!!!

"Let The Bad Air Out" is a jaunty wee fun song about sin, as speedy as the album gets and is about ridding the world of all that is evil by just opening the window. "Use Me While You Can" is another work of detailed travelogue observation sitting around the idea of how small our time here is. Cockburn then offers that contribution that he always longs to make. He invites us to use him while he is around. And so we should. No other artist that I am aware of has ever met with such regularity the challenge that Woody Guthrie threw out; songs should not be just good but good for something.

And so we are back to where we started. Back to that opening song full of clues to this man's entire catalogue. He talks about this faith he has and lets us know the truth that we all need to take out into our world. Faith is nothing if it remains in our hearts or our heads - "it only lives when you give it away".

"Breakfast..." is Cockburn at the peak of his craft. Who else can play guitar this well and write poetry this good. No one, of that there is no doubt. After the early disappointment of the spoken nature of too many of the songs, I have now setltled into the realization that that is the nature of this album. It is beautiful but a beauty that never distracts from the hard truth contained within.