Home Archives Profile Subscribe
BUILDING A CITY OF GRACE - A Review
OH LORD, COME SHINE YOUR LIGHT ON ME

LOVE OR ROMANCE? - A LENTEN QUESTION FOR MAN AND WIFE 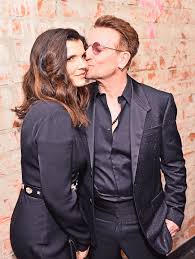 I could never take a chance

Of losing love to find romance

In the mysterious distance

Between a man and a woman

The marriage of Bono and Ali is a wonder of rock history. Bono and Ali have baffled the celebrity press for a long time. They have held family values to the fore in the midst of the madness of a rock star lifestyle. In the press around the time How To Dismantle An Atomic Bomb was released this album’s release the tabloids had a “Six In a Bed” headline that had nothing to do with super models but about the bigger bed Bono and Ali had to buy to fit their whole family in to their sleeping arrangements.

Bono would tell Irish tabloid Sunday World, “Ali is the most extraordinary woman. I still can’t figure her out. I still feel I don’t know her. She’s a very mysterious woman and she’s very independent.” Hence the mysterious distance of a man and a woman.

What the song does nail is the Holywood lie of romance. In the world that revolves around Bono, catalogued best by gossip columns of the celebrity glossy magazines, marriages fall apart in just a couple of years. Pre-nuptial agreements are more vital than the vows. No one seems to intend to keep them. They have become no more than some romantic day out.

‘A Man And A Woman’ challenges the core of such shallowness. Bono declares that he could not risk love for romance. In ‘Miracle Drug’ he has already said that he’s had enough of romantic love and here he is saying that there is something deeper, more important, and much more satisfying.

Bono admits it is a personal song but it is also a raging antidote to all the examples of love that his peers pump into the minds of teenagers and those much older than that.

Listening to this song in Lent drew me to Ephesians 5: -

21 Submit to one another out of reverence for Christ.

22 Wives, submit yourselves to your own husbands as you do to the Lord. 23 For the husband is the head of the wife as Christ is the head of the church, his body, of which he is the Saviour. 24 Now as the church submits to Christ, so also wives should submit to their husbands in everything.

25 Husbands, love your wives, just as Christ loved the church and gave himself up for her 26 to make her holy, cleansing her by the washing with water through the word, 27 and to present her to himself as a radiant church, without stain or wrinkle or any other blemish, but holy and blameless. 28 In this same way, husbands ought to love their wives as their own bodies. He who loves his wife loves himself. 29 After all, no one ever hated their own body, but they feed and care for their body, just as Christ does the church— 30 for we are members of his body. 31 “For this reason a man will leave his father and mother and be united to his wife, and the two will become one flesh.” 32 This is a profound mystery—but I am talking about Christ and the church. 33 However, each one of you also must love his wife as he loves himself, and the wife must respect her husband.

As I read them in Lent, I hear words of self denial, for both the man and the woman. Submission to one another. Christlike cross carrying love. Marriage is tough. It is a revolution. If our wedding vows are to be followed through on and fulfilled then it will take Lenten like self denial. It will take a discipline that puts the sacrificial servanthood love of Jesus over the Hollywood feely weely romantic. Not that I, or Bono, don’t believe in romance but love is a tougher and I believe in the end the more satisfying decision.

Lenten love is not just vertical or horizontally social. I must love the one whose ring I wear.