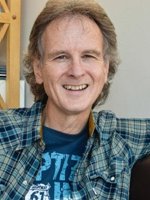 For the next ten weeks Fitzroy TV will be following a series of Ten 10 minute teaching sessions on the apostle Paul. The series will go out at 7pm every Sunday evening but will be available from than on.

What was life like when Paul was preaching and teaching, in the First Century. Few people have been able to take me onto the streets and into the houses and prisons of the First Century world like Gary Burnett. Gary has this ability to bring it alive and then open the Scriptural texts into the vivid context.

The first in this series will prove my point. Gary quickly paints a picture of poverty, slavery, early death rate, violence and opposition to any who would go against the gods of the day.

Into this we find Paul learning in himself, and then teaching the early Christians, to not be anxious but to be content.

Paul in Ten offers encouragement and inspiration as we all try to cope in the current moment.

Gary is an author, blogger, theological reviewer and teacher in the New Testament with particular expertise in Paul.

We invite you to use up some of the extra lock down time by doing us for Paul in Ten.