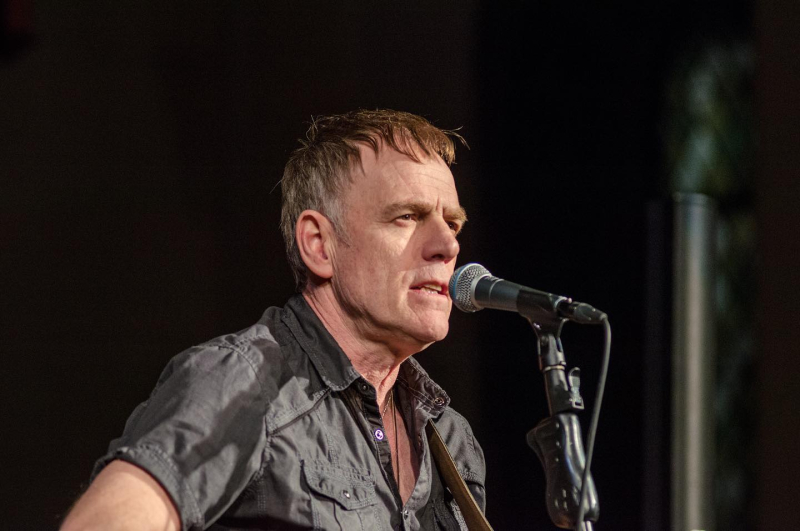 Introducing Martyn Joseph in Fitzroy I realised that I fell in love with his music the same year that I fell in love with my wife Janice. It was Greenbelt 1989 and his live acoustic record An Aching and A Longing caught my attention. Treasure The Questions, Contradictions and the title track were touching on the particular terrain of my spiritual journey at the time. He has been a companion on my journey ever since. So, after thirty years of concerts, the majority of them reviewed, was there anything new I could say about my Welsh buddy?

Absolutely. Over coffee in the afternoon Martyn and I chatted about believing that as we grow a little older we are coming to the peak of our different crafts.  During the gig I picked out the evidence that proved to me that at least Martyn was right.

His guitar playing. Over those three decades of watching him perform he has simply become a better and better guitar player. An instrumental on a twelve string tonight even made me wonder, “Is he thinking of an instrumental record?”

His trusty Lowden, with a shout out for George Lowden who was in the audience, gave way at times. A four string acoustic sounded Cockburnesque and gave a power to I’ve Searched For You and then his electric Judas section added atmosphere to Yet Still This Will Not Be and Sunday’s Coming before adding a jazz jive to This Glass. Elsewhere Martyn’s playing is beautiful, exquisite and declares him a guitarist as much as a songwriter.

His song endings. I remember twenty five years ago when Martyn was making jokes about the way to end songs. The Pete Townsend jump, the quick bow, the flashy last strum. Tonight song after song had a variety of endings each in keeping with the mood of the song as much as any comedic jestoring!

All of this is live craft after year upon year of touring. Few performers are as concert fit as Martyn Joseph.

Martyn is a songwriter however. So what about the songs? Well, a again I sensed I was watching a man at his vocational peak. Two songs to set my case.

A new song called I Felt So Much is an utter beauty. Thinking of his father with dementia Martyn remembers his childhood in his dad’s Renault and celebrates in a gratitude to life.

Nye, is Martyn’s song about the NHS and his homage to fellow Welshman Nye Bevan who died nine days before Martyn was born but left us the legacy of the NHS. Martyn explained the writing of the song, a blank page… title in one corner… brainstorm on the page and picking out a few Bevan quotations and that personal link. It was a great lesson in writing but to be taught during the singing of a song - top of his game is Mr Joseph!

Martyn’s songs move from the personal to the social to the political and the spiritual. A lovely addition tonight was Tom Waits’ Gospel song Down In The Hole. Martyn speaks of the gloom of his songs but ends with a more balanced opinion saying that if hasn’t left a little bit of hope in the listener that he has failed in his task.

Perhaps the greatest hope in Martyn’s recent records and live set is the young. The recent Here Come The Young record also houses Driving Her Back To London where he shares music with his daughter on a car trip. To make these songs more poignant tonight there were a few children in the audience which tickled Martyn and became the focus for this argument.

One final observation to rest my case. I used to watch Martyn Joseph rage and joke and mix it up to catch an audience’s attention. Oh tonight we laughed and got inspired to change the world but the whole gig was measured, like the singer didn’t have to try as hard as he thought he used to. This was a night when a confident artist displayed his wares and in the peak of what he does opened up a broken world before shining the light through the cracks to give us some love and imagination to carry on. As he had us all singing:

The things that we have carried here

Someday they will disappear

The things that we have carried here

Beautiful, we can be beautiful

Was an incredible night Stocki ,he never fails in delivering a good Belfast gig ,was superb ! Only bad thing about it was we had no time to stay afterwards to go and have a wee chat with the man himself ! I wanted a wee selfie with him too.!