Home Archives Profile Subscribe
MEAT LOAF, ME AND JESUS!
POETRY AT 4 CORNERS FESTIVAL 2020 - AND A BOOK OF IT

GETTING TO INTERVIEW GARY LIGHTBODY AND KEN HADDOCK!!! 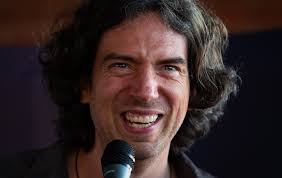 When I was 17 years old I wanted to be a journalist. Since I can remember, I had always had a pen and paper in my hand. It might have been taking down car number plates or playing my own football leagues but always writing. By Sixth Form I was recording my own radio shows on C60 tapes and writing a Youth Club magazine with record reviews etc.

I applied for journalism courses at University. I actually went to Sunderland Polytechnic to do such a course but two days later came home. A quick interview with my school headmaster and I went back to school, took RE in one year and set off on a different route to theology and ordination.

Yet, as I travelled down that different vocational path the journalism was never left behind. I ended up a blogger, editing a Christian music magazine, hosting a radio show and in the next two weeks get the chance to interview Gary Lightbody and Ken Haddock at the 4 Corners Festival.

I would be wrong to say that I am not excited.

The Gary Lightbody In Conversation is one of a series. At the last three Festivals I have had Conversations with Iain Archer, Ricky Ross and Brian Houston. They all took different shapes as will this year’s with Gary.

The biggest difference with Gary is that I have never met him. Oh I am friends with some of his best friends and so I feel a little more connected to him than most other rock musicians but there will be something fresher and edgier about this interview as a result of the fact that we will meet on the stage.

I have followed Gary’s career for longer than most. My friend Jonny Quinn became his drummer. Iain Archer was living with me and giving me some early stories. I remember Iain telling me they had had to change their name from Polar Bear to Snow Patrol. After first being called Shrug, I thought they should be called The Band With the Silliest Names. Snow Patrol - not so silly now!

Gary was chosen for this year’s festival because we were wanting to build up the city. Lift our morale. Few people have contributed to developing our city than Gary Lightbody. I want to know why? When did he fall in love with Belfast? Did he always? Or was it when he was away?

I am also keen to know more about his Granny Rea. I love what he sings about her. Oh there are many other things. Lyrics that fascinate me.

The week after we have an event at the Festival called The Belfast Songbook with Ken Haddock. As I have met with Ken about the event I have been intrigued by his story of growing up in Belfast. We will be hearing some songs about the city and some that have helped Ken through his life here. Ken does amazing covers, reworking songs in ways that bring out things you have never heard in the familiarity. There will be a couple of Ken songs too!

The Songbook… event has been moved from The Black Box to Fitzroy because of the demand. That means that there are still places available. It will be a powerful evening!

Can I ask you to be precious with the tickets. We use Eventbrite to guide us on numbers. If you have tickets for either of these events and for whatever reason now do not intend to attend please let us know so that someone who wants a ticket might get along.

There is music at most of our events. Please check details: - Music at 4 Corners Festival 2020