Home Archives Profile Subscribe
STOCKMAN TO GIVE YOU A THOUGHT ON CHRISTMAS MORNING - and other Wednesdays!
IS THERE A WEE BIT OF HEROD IN ALL OF US? 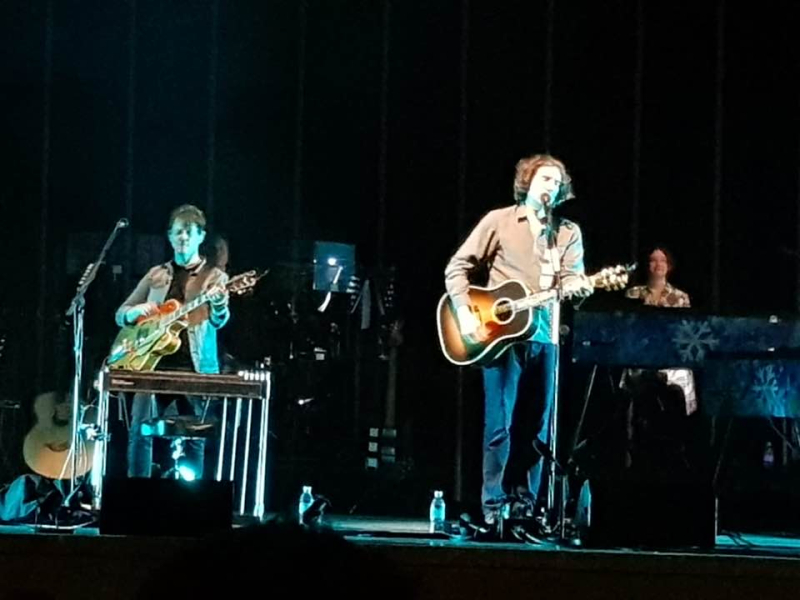 I woke this morning still buzzing from the Snow Patrol gig in Belfast’s Waterfront Hall last night. It is was not the usual buzz though. Usually, in recent SSE Arena concerts, or indeed Ward Park in May, it would be the anthemic noise still buzzing through my veins after a Patrol gig. This morning it was the intricacy, intrigue and intimacy of all their hits reworked that lingered like a big huge smile across my heart.

This particular set was a bombardment of musical stimuli. The embellishments of familiar songs with a string quartet, a brass section, an added percussionist and then the utter wonder of Iain Archer who produced most of their Reworked album and Miriam Kaufman, who Gary rightfully gave credit and thanks for the arrangement credit of this entire live enterprise - it was more than “almost overload”.

I found it almost overpowering in its stripped back reimagining. I was just coming to terms with one song when another kicked in, then another and another. And do not think that stripped down meant quiet or unplugged. Nathan might have had to discipline his strut on occasion but there were times when five guitars filled the front of the stage!

The Church organ sound of the opening Dark Roman Wine; the now fragile You’re All I Have; the near country hoedown of New York; violins plucking the waltz of Time Won’t Go Slowly; the grace notes of brass on I Think Of Home; the electronica and vocal wonder of You Could Be Happy; Lifening turned into a Tired Pony cover by Iain Archer's pedal steel, prominent throughout the set; Iain's seemingly impromptu extended acoustic blues guitar gives Take Back The City an interesting intro that eventually turns into The Band meets Crosby, Still, Nash and Young; the deep Celtic soul atmospherics of Spitting Games; Chocolate glocked into soaring joy; every emotion in Run eked out with the string quartet bombing your heart; Heal Me coursing through “like an orchestra” indeed; my personal highlight (I wept) of Miriam Kaufmann’s duet on (Set The Fire To) The Third Bar; the vocal onslaught of harmonies of Empress, fuller, lusher with nothing “damn simple” about it; Called Out In The Dark doing electronica, guitar rock, strings and brass in the most ambitious of fusions; Shut Your Eyes like full on Undertones while hiding that big chorus in subtle touch; teasing violin rock riffs and more vocal gymnastics on Chasing Cars; tinkling piano leading us into Open Your Eyes; the spiritual communion of the pastoral What If This Is All The Love Your Ever Get with the oh my of a cello; and the love song turned election message to naysaying Northern Ireland in Just Say Yes!

Phew! "It whispers and roars like an orchestra!" Even more incredible is that even a cursory glance at that set list and how it played out reveals that not only did they add reworked songs that weren’t reworked for the Reworked record but they even reworked the songs that were reworked for the Reworked record. This is a band giving their all and more value for money than most to the fans who have been there for the 25 years that they are celebrating. Gary was his usual down to earth ordinary self in his between songs chat and banter.

For me there was subjective joy. There was a time back in the early to mid 90s when I amateurishly guided the fledgling career to Iain Archer and his then drummer Jonny Quinn. I always said that if Iain didn't make it in music that I would end up the Archbishop of Canterbury. Anglicans can rest easy! To see Iain and Jonny along with Miriam on this stage, at the peak of career and popularity was quite emotional.

I remember Miriam Kaufmann living in my bungalow for a time. I used to hear her sing. “You should record Miriam,” I would say to a young woman who had grown up in a recording studio. She showed no interest as much as I tried. In this gig she not only arranged it all but on Third Bar there she was centre stage, utterly breathtaking… and a tear crept down my cheek!

It has been over a year since we knew Snow Patrol would do something special for their 25th Anniversary. It has been almost as long since I knew what that was going to be. I have yearned for it with great excitement. Last night the sophistication of its musicality didn’t let me down… but I am now sad that it is over… it was so good!

Great review. I received my Reworked album last week in the mail and have listened to it twice a day full blast on my car stereo on my hour long commute to and from work. Now I am so jealous that I could not fly across the pond to attend some of these shows. I particularly like the reworked Third Bar and love Made of Something Different Now. I have cried several times as Gary's voice is so gentle and sincere sounding in these softer versions. Bravo to SP!