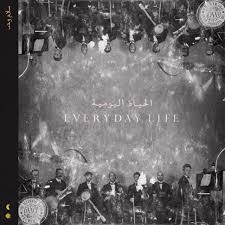 Precariously traversing the contemporary crises across the world and bringing God and spirituality into the the mix. Welcome to my world…  and apparently the world of Coldplay too!

The fact that I have every Coldplay album ever released but have never reviewed any of them on Soul Surmise tells you that I like Coldplay but don’t love them! Well, that might be about to change!

At midnight on Thursday I spend half an hour listening to snippets of the new album releases. Everyday Life sounded intriguing me but didn’t grab me immediately. My friend Chris Hunter texted Friday morning. He had played it through on his way to work and thought I’d need a listen too.

Thank you Chris. I did. He pointed me to BrokEn and When I Need a A Friend. Within minutes I had sent the former to Gary Burnett our Fitzroy blues guy and he had claimed it for the next time he is leading a Sunday service. We both thought When I Need a Friend was more for organ and Chris Blake!

That we had been thinking of Coldplay in worship liturgies suggests something different is happening on this record. It is.

Everyday Life is Coldplay’s White Album. No, not in most most amazing record ever made kind of comparison. Not even in its double album category. This album actually masquerades as a double record. It is all on one CD and is shorter than some previous Coldplay records. It is just that it is divided into Sunrise and Sunset as in all in the span of one day. Very Moody Blues!

No, Everyday Life is like the White Album in its lack of band cohesion and its scattering of genres all across it. Across these sixteen tracks (I am not even calling WOTW/POTP a song) we have gospel, blues, doo wop, brass, classical, folk and more spoken word than Revolution 9 ever dared get away with! There is some Coldplay in there too, Champion Of The World, their tribute to Frightened Rabbit’s late singer Scott Hutchinson, the one that will most easily fit the last live set list!

All of this makes for the most interesting Coldplay album, to my ears. There is tender piano and fragile guitar. There is Kemi Futi Afrobeat jazz and Gospel choirs. There are songs about racist violence, gun control or lack of it, Syrian refugees, parenting, of course love… and a whole lot of God.

Personally Orphans, Arabesque and Guns are the songs that deepen the Coldplay catalogue and grab my attention. However, Cry Cry Cry, Church, Daddy and Eko are equally interesting.

A few people have said to me, “I’ve been listening to the new Coldplay album and thinking that you must be all over that.” I hope that is a compliment to say that I quickly come to mind when music goes deeper but obviously with this one it is about the spiritual references.

They are slightly more than references. Everyday Life’s first lyric is in a song called Church and though that could be described as a love song with an interesting title it is not long until we have pure Gospel Blues on BrokEn:

But inside I'm free (Ooh-ooh)

'Cause the Lord will shine a light for me

…and then the Church-like When I Need A Friend:

Shield me, show me

When I need a friend

When I need a friend

The entire album plays out at the end of the title track:

At first light, throw my arms out, open wide

This all points to a Fitzroy Gospel According To for sure but hold your evangelical horses though if you are itching to declare Chris Martin as you latest Christian superstar. Martin grew up in a Christian home and has constantly returned to that well for lyrical inspiration. He has distanced himself from that evangelical branch of Christianity and now calls himself an all-theist.

That is more what might be happening here. There are spiritual quotes all over this record but none from Bible or Koran. The message of the piece is a simple answer to the final questions mused on that title track; questions I am asking in sermons every Sunday:

What in the world are we going to do?

Look at what everybody's going through

What kind of world do you want it to be?

Am I the future or the history?

This Coldplay record is calling for am answer that sees humanity as one big family. Arabesque reminds us that we all have the same blood. A John and Alice Coltrane quotation “May there be peace and love and perfection throughout all creation, through God” on the song Children of Adam remind us we all have the same origins.

Many will see Everyday Life’s Gospel as simplistic and sentimental but the solution to all nations getting on is not rocket science. Perhaps in the positivity of solution Coldplay are ignoring the need to deal with the selfish problem at the core of our humanity and racism but an album like Everyday Life can only be a good message to reverberate around our polarised world just now.

Here’s a wee tip. Go to Youtube and watch the launch of the album, performed in its entirety live from Jordan. It is quite the experience and has me declaring that Everyday Life is the most “I want to go back and hear that again” Coldplay album that this soul has yet heard!