THE ORPHAN BRIGADE LIVE IN THE BLACK BOX, BELFAST 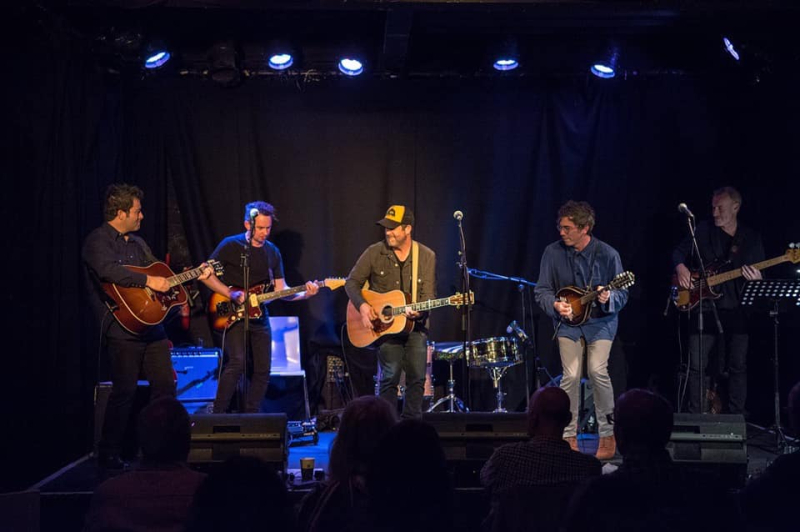 Watching The Orphan Brigade live was the strangest experience for me. When they played the title track of their new record, To The Edge Of The World, I was immediately looking out from Kinbane Castle towards Fairhead. I could feel the breeze, and see the wind blowing off the surface of the Seas of Moyle.

This is where the song was written and so I went there in August to listen. The sounds and visions are now indelibly blended, even if I am listening in the windowless room of Belfast’s Black Box.

The between songs chatter tonight was a fascinating drive up the Antrim Coast. Ben Glover talked about scaring the life out of band mates Neilson Hubbard and Joshua Britt in a dark midnight writing session in Glenarm Forest - “it was the trees!”. Hubbard spoke of being out in Glenarm Bay in a boat. A thorn tree half way up the mountain was far enough to draw on St. Patrick On Slemish Mountain. As Glover introduces Mad Man’s Window, I was imagining looking through the rock formation. I could see the sea, still in this windowless room!

Indeed, I couldn’t help but think that if these guys were Bruce Springsteen, there would be films projected behind them of all of the East Antrim locations featured in tonight’s show. Oh for the bigger recording budgets of the good old days!

I couldn’t also help but think that if this was the early 70s these guys would be a super group. Something like Souther-Hillman-Furay Band. If songwriting was held in the same esteem as back then, then Glover, Hubbard and Britt would be stars for sure. Another advantage of this gig was picking up the solo CDs. All three of The Orphan Brigade’s solo records are carefully honed collections of the highest quality of song-smithery.

Together on stage it is the harmonies that light up the room. This is Crosby, Still and Nash stuff. Voices perfectly blending and bringing lament, wonder and mystery to songs of myth and history. Lots of people die in an Orphan Brigade record but it doesn’t make it miserable.

Far from it. There is a vibrancy to this collaboration. Tonight we benefit from having Colm McClean and Conor McCreanor in behind the Orphans. McClean’s slide guitar deserves special mention.

Occasionally Hubbard moves to the drums and sprinkles some percussive magic into a few songs particularly Marching On Christmas Day off their debut Soundtrack To A Ghost Story.

Centre to the whole musical thing is Joshua Britt’s mandolin. I never thought I’d want to be a mandolin hero. Like this trio’s Stephen Stills, Britt plays with a flourish, adding drive, sparkle and a little intensity to the muse.

The live setting suits The Orphan Brigade. Whether in a haunted house in Kentucky or caves in Italy or, as in most of tonight’s set, in East Antrim, these create in organic ways. So for me To The Edge Of The World sounded even more alive, live. The voices more powerful. Everything more imperfectly perfect.

Oh yeh, I would have taken some additional Uilleann pipes from Barry Kerr and the song Black Nun but hey! Most poignant and beautiful of all tonight was To The Edge Of The World’s near benediction Mind The Road; Glover's first dabbling at singing about the Irish Troubles:

“Slow river cuts through the land

The dead are talking to the dark

The lingering shadow of a gunman

Mind the road you go

Mind the road you came”