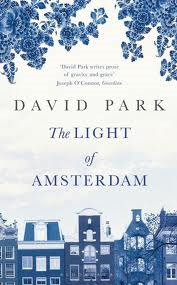 Amsterdam is my kind of novel. It begins at George Best's funeral and before long one of the main characters is trying to get his son to join him at a Bob Dylan concert in Amsterdam. These are my kind of events. Park is a Northern Irish writer and his Baptist upbringing brings a spiritual dimension to his observations of people and relationships.

In Amsterdam Park follows the paths of three people with differing relational fractures; one has made a sexual slip, messed up his marriage and needs some parental time with a withdrawn teenage son; another is a one parent mother whose involvement in her daughter's stag weekend leads to a major rift; one feels her marriage is in such a state that she comes up with a bizarre scenario for her husband during their weekend break.

The time that all three of these characters spend in Amsterdam becomes like a spiritual wrestling where they all find themselves whether they are trying to her not. There is a lovely scene where two of them meet and go into an old church. There is a holy beauty in this place that in some ways is where Parks is dreaming for all his "flock." Don't get me wrong, there is no Christian theology or preaching in the book at all but Park sees something in the world that needs a transcendence.

Park is a wonderful writer. His development of characters is deep and always intriguing and insightful, almost in a pastoral way. There are moments when you feel that he writes like a painter, sitting in the middle of places and instead of sketching or using oils, writing what he sees in meticulous details.

Amsterdam comes alive with this detail and his record of George Best's funeral and his review of a Bob Dylan gig are great. He is without doubt another addition to the long line of great writers from our wee country. As Bono said, a "We don't design bridges or send people to the moon, we write." David Park is more proof of that and Amsterdam is yet another example.