BEING WITH THE OTHER - JESUS MODEL, JESUS CALL & THE CHARACTER OF GOD 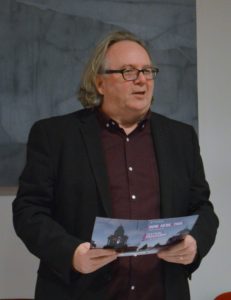 Two 4 Corners Festival quotations have struck a long chord with me. The first was at The New Irish Arts performance in Clonard Monastery in 2015. Taking a mainly evangelical Protestant group  onto the Falls Road for the first time is very 4 Corners Festival. That the them was the First World War, even more so! In that performance was a line, “Hatred is compromised by friendship”.

Then in 2019 we had Catholic Priest Fr Greg Boyle spoke in Skainos on the Newtownards Road about radical kinship. The responder to Fr Greg was PSNI Temporary Assistant Chief Constable, Tim Mairs. This was again poignant as we were just days after the murder of Ian Ogle just a few streets away. In Tim’s address he said, “It is hard to demonise someone you know”.

Recently, in my BEING WITH sermon series in Fitzroy I was looking at BEING WITH THE OTHER. Friendship. Knowing someone. It is all about relationship. BEING WITH.

Jesus was WITH the OTHER. Whether a Samaritan woman who was OTHER in gender, politics and religion. Zacchaeus who was OTHER in being seen as a traitor, collecting taxes for the oppressing Roman Empire. A Roman centurion who Jesus described in some of the most radical of all his sentences, “Never have I seen such faith in all of Israel”. Oh my!

Jesus modelled BEING WITH THE OTHER. He also called us to it. For those of us who live in conflict zones Luke 6: 27-36 is a tough Gospel passage. Here Jesus calls us to “Love your enemies, do good to those who hate you, bless those who curse you, pray for those who mistreat you”. This is heavy stuff. Jesus most radical call perhaps.

Yet, Jesus goes on to explain to us that this is the very stuff that his followers are about. To love those who love you? Anyone can do that. He then repeats the loving and the doing good before he brings this call back to the character of God - “Be merciful, just as your Father is merciful.”

When I sued to take University Chaplaincy team sto South Africa we met with a man called Rev Dr Spiwo Xapile. Spiwo used to say how we always seem to have excuses about feeding the poor or looking after the marginalised. Oh how that is the case with BEING WITH THE OTHER. We have so many excuses. Political, theological even. Yet, in this sermon on the plain Jesus leaves us no excuses.

BEING WITH THE OTHER, compromising hatred with friendship and eradicating the demonising of people by getting to know them. It is the model Jesus leaves us, the call that Jesus gives us and it all comes from the character of God. Let us quit the excuses!