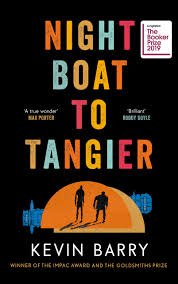 A few years ago I stumbled across a book called Beatlebone. Those who know my Beatle fandom will not be surprised that it caught my attention. I picked it up, bought it and truthfully enjoyed the read. It was a little whacky for sure.

I enjoyed it but didn’t expect the writer Kevin Barry to be taken too seriously. It turns out he has been taken very seriously and one of the critically acclaimed novels of the year is Barry’s Night Boat To Tangier. Beatlebone had given me a soft spot for Barry so I needed no more convincing.

In many respects the two novels are similar. First things first. Barry is a lyrical writer. He is all about weather and skies and rivers and seas and the colours and moods that they conjure. He attempts usually successfully to conjure words that are almost poetry.

Into this poetic prose he has a trait for the profane and the profound, sometimes in the very same paragraph. I need to warn you that there is a lot of violence and sex in Night Boat To Tangier and the sex references are uncouth most of the time.

The drama is built around two Irish rascals Maurice Hearne and Charlie Redmond. The book starts with them in the port of Algeciras in Spain just sitting, chatting. When I say just chatting, it is page after page of Irish banter, hilarious much of the time. You will laugh out loud. Barry has a talent for the conversational.

From this seemingly harmless and almost endearing beginning Barry throws us into a world of  sex and drugs and murder. There is an intensity to the story. Fear and love flow together as avarice overtakes any sense in the life choices of our main protagonists.

Night Boat To Tangier is a book about choices and regret, every day love and the terror of drug trafficking. It is about the domino effect of one of life’s decisions knocking down every other domino in the collapse of marriage, family, friendship, the heart, the soul and the mind. It’s like a long tense journey towards the desperate need of repentance and grace and somewhere in there, if you listen to Barry’s literary wonder closely enough, you might find your own life. I did!