Home Archives Profile Subscribe
ASK A SHORT TERMER FOR A COFFEE - GO ON!
SERVICES OF WORSHIP MAKES SERVICE OUR WORSHIP 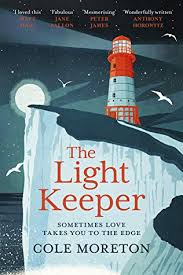 Cole Moreton’s debut novel is an astounding success. It took maybe 20 pages but once I had put on the bits of the characters I was in, enamoured by those characters and fascinated by where their journey would lead.

The Light Keeper is not an easy read. The light is taking a hammering and desperately needs kept. Moreton leads us into hearts sorrowing with one’s man grief and another couple’s infertility. He sets us up on the edge of Beachy Head. The shadow of suicide is all around us. People who are finding any light elusive are drawn to there - you don’t need to jump, you just take another step.

Moreton has such a way with words. He is a songwriter, a journalist and, though this is somehow his first novel, he has already published four books, Hungry For Home and The Boy Who Gave His Heart Away being my personal favourites.

The scenes of The night Keeper are set in the most poetic prose of sea and sky. Beachy Head is on the English south coast with white cliffs and the green Seven Sisters hills rolling all around. The Tourist Board of East Sussex could use swathes of The Light Keeper to advertise its sea side wonder.

Then the characters. Moreton forms them so preciously. He shows a gift for words certainly but his strength is in his love for human beings. All of these characters are flawed but you end up finding sympathy with most of them.  More than sympathy you want to know what has gotten them in these dark corners and you find yourself praying that Moreton somehow finds them a way back to the light.

I say praying. That might be freudian. There is a spiritual layer to The Light Keeper and it should all be filed under pastoral. I found myself as a Church pastor, listening carefully to the insights in the conversational text. If you want to know the wretch on the soul that grief or childlessness is then here are the real emotions. It is very sore in places. Frustrating. Confusing. Angry.

As the two characters who seem most lost in the dark serendipitously fall into each other’s sphere they somehow help each other to nudge towards the light. Can their vulnerability be the key to salvation? That and resilience that comes from those who have loved us well. Love well in this life and that love can change worlds after you’ve gone.

I could philosophies on. If this is all not enough Moreton has revealed a penchant for plot surprises. In a book that is set in a very confined space of land with very few characters Moreton throws shifting sands all across it. The pace is gripping at times and you are never quite sure where it will all end. All of that leaves you turning page after page with no desire to put it down.

A debut novel. Goodness me. The Light Keeper is some start.