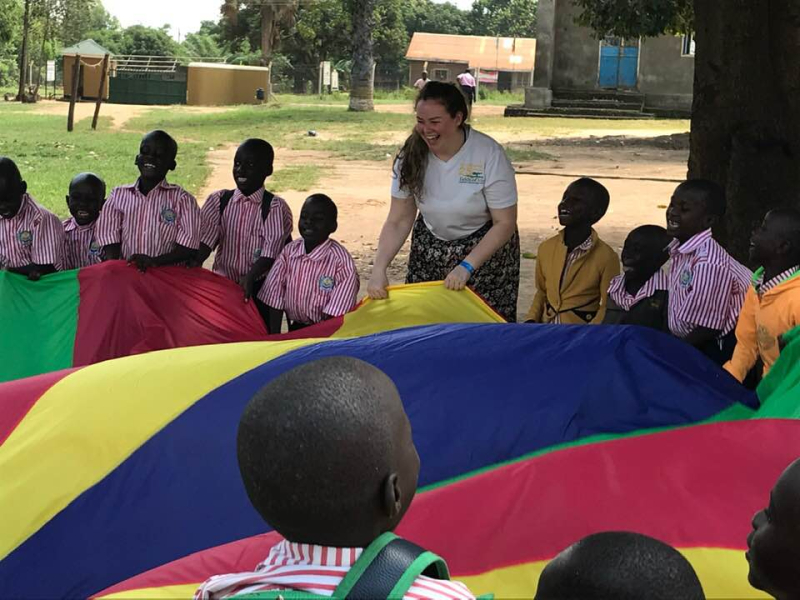 So why would I even think about being in Uganda on the week that my dreams were fulfilled of a British Open at Royal Portrush?!

Well, it is the VIPs! VIPs in a British Open sense are all those famous rich people that everyone on Facebook got a selfie with. For me the VIPS in my life are the children on a school play ground on the edge of Arua, west Nile, Uganda.

Around 2012 when we were deciding to extend our Church Halls at a cost of £750,000 I heard how my friend Alain had built a school in Uganda for £75,000. The accountant’s son in me worked out the tithe thing and before long Fitzroy were in partnership with Fields of Life to fund a building for Onialeku Primary School.

The cold blooded financial deal turns into the warmest hearted of relationships. Since 2015 when we sent a Youth Team to open the school we have been there every July.

It has been a real learning curve for me, reading theology about mission, which has changed vastly over these last twenty years, to understanding Uganda and attempting to find the rhythms of another context so that by somehow syncopating our rhythm into that rhythm that there might be mutual sharing and learning. Five years in and we are still attempting to blend those rhythms better.

Every team is different, with different gifts to contribute. Last year we had a few teachers who partnered in the classrooms. This year was the first year we had a handyman who built four classroom shelves and fixed a few dangerous plugs among other things. Someone else took on a painting project that painted the outside of the school and freshened it up beautifully. Both projects involved teachers and locals in the work.

The rest of the team continued the general schedule of the last two years. We again rolled out the very informative I Am Girl programme. This is a Sex and Hygiene education programme. We also took the P7s who had done the course last year to share about some extra identity issues.

Sport and games filled the playground. The sound of children having so much fun playing with a parachute and ball or learning skittles for the first time. It was joyous! Afternoons were spent playing puzzles and lego and more games. Knitting has been a staple part of the programme since we first arrived. Classes full as always!

This was all wrapped around some Bible teaching. The mornings were spent doing a Kids Bible Club, with puppet shows and songs, three times - for nursery, P1-P4 and then P5-7. This year we did a short discipleship course, the fruit of Jesus teaching. On the last morning we then did a craft of five fruit with the lessons written on, that they could wear in a fruit basket on their heads. They wore that basket all day long!

In the afternoons we did the same discipleship course with the teachers, unpacking the lessons with wider biblical teaching. This proved a wonderful avenue for fellowship and some questions were fascinating and tricky to answer. The teachers got real fruit rather than a basket of cardboard cut outs!

This is obviously only the programme. It ran smoothly. However, that is not the point of the trip. We have been very influenced by English missional theologian Sam Wells who points out that Jesus spent only a few days of his life “fixing” us but 90% just “being with” us before he did anything at all.

It is in the “being with” that the incarnational grace of God begins to flow. In those moments we share our lives, our faith, our struggles and our hopes. In those moments we exchange dignity, hope and empowerment, the three word motto at the new cafe Borderlands that we discovered and enjoyed.

We are heading home now (Team gone - Stockies still in Kampala for a few days) to ponder and surmise what we learned. How the very different rhythms of West Nile might interrupt our western infected rhythms? What their faith teaches us?

For me best of all is marvelling at the image of God stamped humanity that we had the privilege of loving and being loved by. I see Jacqueline smile as I find her face in the crowd, Rachel go all shy and Jonathan and I point at each other across that playground.

The wonder of these children. It is why I would rather be taking selfies with them than Rory or Tiger, Tommy or Shane.

God was on to something when he invited us to love who the world define as the least. Right there we encounter God and “the least of these” don’t so much benefit from our condescension as smash to pieces our misplaced arrogance! Thank you VIPS of Onialeku Nursery and Primary School!