Home Archives Profile Subscribe
FEEL THE SILENCE
WHAT WE DID... ON OUR MISSION TRIP TO UGANDA 2019

BEING IN UGANDA FOR THE PORTRUSH OPEN - A SURMISE! 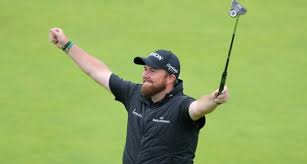 I waited about 45 years for the British Open to be played at Portrush. I went to my first Open at Muirfield in 1972. Trevino stole it from Tony Jacklin on the 17th. I started playing seriously the very next week.

I was aware that Royal Portrush was as good a course as any by the age of 16. I had played Carnoustie and St. Andrews, where I had been for the 1975 and 1978 Opens. Portrush should have the Open back. Of course The Troubles were in the way for twenty years but as the millennium turned my dad, now a member at Portrush and my mother dreamed.

Sadly, my mother never lived to see it, and my dad’s dementia means that he will never know. Me, I was in Uganda! Oh, it is recorded for when I get home, and I will watch it over and over, but this morning I am grabbing a glance at whatever I can find on YouTube!

I was on a school playground in north west Uganda when the Open started and I told the school that, though all the world’s so called VIPs were in our place, these school children were my VIPs. I wouldn’t have been anywhere else, not even Portrush. That probably says something about how my life has changed since my golf obsessed teens.

However, it was painful following it with very sporadic wifi! My friend Pearse had a free roaming app and was keeping me up to date. We were at a sensational African Dance evening as Lowry and Fleetwood hit the back nine on Sunday. During intricate dances I was shouting across the table, “still six shots? How many holes?”

Though a Tommy Fleetwood fan, Shane Lowry was my man from the moment I heard that Rory’s fragile head had thrown the tournament at the very first hole. Since he won the Irish Open as an amateur in 2009, I have always reckoned on Lowry winning a Major. So close to a US Open in 2016 his form took a dive, until an 8th in this year’s USPGA suggested better things. When Rory succumbed to his psychological fragility I saw Lowry first round score and thought maybe!

On Thursday evening I read a Facebook status that had already closed off the possibility of a local winner. Maybe sectarianism! I am more likely to think a lack of knowledge of Lowry’s decade as a professional. When everyone was touting Koepka because his caddy Ricky Elliott, grew up playing Portrush, they again forgot that Lowry’s caddy was from just sixty miles away. Bo Martin had the local knowledge without being confused by the club he played to the ninth green being so different than the one he’d have to recommend to a serial Major winner!

I again feel blessed by milking the Venn Diagram Affect of being Northern Irish. Those six little counties, still constitutionally British but geographically on the island of Ireland. If your soul is open and you can stay free of the bigotry such a squeezed space can grow then you can benefit by being a bit of both!

Golf has always, like Rugby, been an island wide sport. Amateur golfers play under the Golfing Union of Ireland. It seemed right, in every sense, that as Lowry marched to victory, and particularly when he walked up the 72nd hole with about seven putts for it, that the Portrush crowd played the Venn Diagram Affect raucously!

“Ole Ole Ole” ringing out across North Antrim’s coastline is not only the sound of a “home” winner, for the first British Open in Northern Ireland since 1951, but maybe also a sig of how far we have come as a people in these last twenty years!

I cannot wait to get home and watch it all. There will be tears!