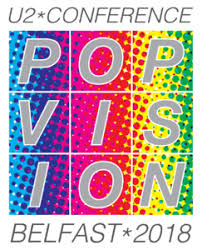 It doesn’t get much better. I was sitting across a lunch table listening to Steve Averill explain why he suggested that a young band from Dublin should change their name from The Hype to U2. Steve is a graphic designer and it was all about how big U2 would look on posters. It get’s elongated!

As I am hearing the story from the very source, I am tucking in to a meal from my favourite restaurant, Holohan’s Pantry. It is all happening in the Alexander Hall in Fitzroy. It was no dream. It happened.

It happened a year ago this week. The U2 Conference came to Belfast and was hosted by Queens University and Fitzroy!  The reason that it has taken a year to blog about it is that a day or two afterwards I was in Uganda on sabbatical!

It had been two years previous when the main curator of the U2 Conference, Scott Calhoun, suggested taking the Conference to Ireland. We were having the conversation in Dayton, Ohio and I assumed that Scott was thinking Dublin. No, 2018 would be 20 years after Bono’s hands in the air with John Hume and David Trimble in the days leading up to the Good Friday Agreement Referendum. It would be Belfast.

What a thrill to host such a quality conference. Pop Vision, as it was named, was a mix of academics, music critics and U2 collaborators contributing to a few days of U2 conversation amongst fans from all over the world.

The conversation was well fuelled. I was gripped with Prof John Brewer from Queen’s University giving us the political situation in Northern Ireland in 1998. I felt close to the action as Catherine Owens took us right into the delivery of PopMart’s LED Technology. Stuart Bailie set U2 into the wider context of Irish rock music through The Troubles with special emphasis on U2. Another Queen’s University lecturer Dr. Fiona Magowan did a magnificent session on ethnomusicology and asked the question could music end conflict.

Beyond that I had the privilege of making two contributions. The first was with the help of my Fitzroy singers who conjured up various U2 acoustic covers. To add to the fun and drama, some delegates were asked to pull a song from the hat and then do a short talk about the song, after it had been performed. These were passionate, intense, spiritual, emotional and humorous.

In the final Friday afternoon event I got the privilege of interviewing Andy Rowen who has had two U2 songs written about him, Bad and Raised By Wolves. For the rabid U2 fans present Andy was like a saint in from of them, when he pulled out a piece of shrapnel from the Dublin bomb of 1974 the subject of Raised By Wolves he had to pass it round like a relic. Andy is gripping and it was quite the afternoon, stepping back into the dark of our Troubles and then finding light in Andy’s redemption story. A wee twist in the tale/tail was when I thanked Peter Rowen for filming it. Even U2 fans hadn’t spotted the face on the cover of Boy and War in their midst. More glee!

Oh my! What a few days. The best part though was the community. Realising that I cannot even be considered a fan amongst such committed obsessive fans. I loved the buzz, the chat, the insights shared in those chats. This was a special bunch of people to have in our Church Halls for those days. Friends forged. Band celebrated. Much to remember, even a year later!