THE KILLERS AT GLASTONBURY - THEIR DEFINITIVE CONCERT! 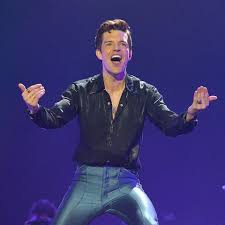 It was at least ten years ago that I suggested that the stadium artists might be gone. The industry shifted. Album sales plummeted. I wondered who would have a career big enough or long enough to be able to full stadiums. “The Killers,” I said.

As if to prove me right they showed their contemporaries and those who have gone before them how to do a Glastonbury headline show on Saturday night. I had already chastised myself for not going to see them in Belfast and then they mesmerised me with a machine gun fire of memorable songs on the biggest rock stage of all.

It is one thing to write good songs. To write good songs that can fill a stadium or in the case of Glastonbury a vast farm is another thing. The Killers have songs that reach. Somebody Told Me, The Man, Smile Like You Mean It, Reasons Unknown… The strongest of sets left the absolute stonkers to the end. All These Things That I’ve Done and When You Were Young to end the official set and then Human and Mr Brightside in the encores.

I loved the sneaky piano version of Human during the main set which must have thrown the crowd that it wouldn’t get its full band version. That was not the best surprise though. It was the surprises that made this gig special.

In Belfast last week they took note of their surroundings and did covers of Van Morrison’s Brown Eyed Girl and The Undertones’ Teenage Kicks. In Cardiff it was The Alarm’s Rain In The Summertime. What would they do in England?

Well at Glastonbury, The Killers gave us the Pet Shop Boys collaborating on their 1987 number 1 Always On My Mind and then covered The Smith’s 1984 single This Charming Man with Johnny Marr on guitar. He remained for Mr Brightside.

Now, we could leave it at as interesting guests… but we miss something! Brandon Flowers has spoken since the beginning of being most influenced by the British music of the 80s. What The Killers gave us for the 90 minutes before was a sound that sits perfectly between the glitz pop of The Pet Shop Boys and the indie rock of The Smiths.

These were not causal choices of Glastonbury guests. These were guests to make the definitive story of The Killers on the biggest stage that they will ever play. Surely, it was up there with the all time great Glastonbury headliners.