Home Archives Profile Subscribe
GOD OF JUDGEMENT OR GOD OF LOVE; A SURMISE ON 40 YEARS OF FOLLOWING JESUS
STOCKI'S PLAYLIST OF COVERS OF GEORGE HARRISON SONGS

THE HEAD AND THE HEART - LIVING MIRAGE 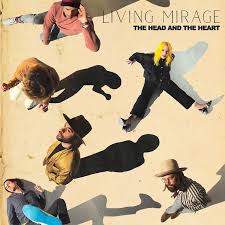 Five years ago in the Calvin College Sports Centre, The Head and the Heart wowed me and I fell in love with their melodies, harmonies and poetry. I ate up their first two records, the eponymous debut and the follow up Let’s Be Still. I don’t think they weren’t trying to be spiritual but they were to me.

Signs Of Light was the first record they released with me as a fan. I was eager for it and though I wouldn’t say that it was a bad record it didn’t live up to the first two. There was something too major label, too contrived for sales about it.

Living Mirage hits the spot again. It has enough dollops of their more organic first two records to blend more perfectly with the more commercial rhythms and beats of Signs of Light. They get it just right this time.

The tinkling piano underpin of Saving Grace. The downbeat People Need A Melody with the shifting lead voices. The whistle and strum start to the closing lo-fi Glory of Music.

The Head and the Heart’s strength is their unique melodies, original without going quirky, and the layered harmonies that soar in the most organic of ways. On this fourth record they bring all of that to the pop driven shiny beats of See You Through My Eyes, Missed Connection Honeybee and Running Through Hell effortlessly. I Found Love is the perfect blend.

I Found Love might also be the lyrical mission statement:

It's not the love that's in your mind

With best west coast philosophy The Head and the Heart is looking for a love as authentic as the music. In the world we are currently living in it might be our Saving Grace along with music (People Need A Melody and Glory of Music).

In the end they almost confess to be the modern version of Fleetwood Mac by sneaking the word Mirage in to the album title. The musical intrigue of a Lindsay Buckingham and the multiple vocalists make for a good argument. It has the sunny day soundtrack feel of Rumours or Tango In The Night for sure. Maybe in the end, their strongest album to date!