Home Archives Profile Subscribe
VOTE THAT WAY!
I SURMISE MY CHANGE OF OPINION ON A SUNDAY BELFAST MARATHON

SONGS CAN CHANGE THE WORLD - FOR PETE SEEGER'`S 100 BIRTHDAY 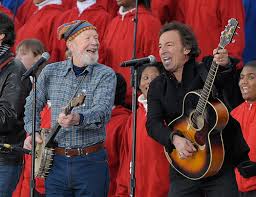 Pete Seeger’s legacy was handed down to me through other people. That in itself is his legacy. Seeger was as much an interpreter of songs as he was a songwriter himself. One of his aims was to hand songs down so he probably would be prouder than annoyed that that is my relationship with his legend.

I would call myself a Seeger fan yet I don’t own one of his albums. My first real exposure to his work was when a tribute album Where Have All The Flowers Gone was released in 1997, soon to be followed by If I Had A Song and Seeds.  The versions by Jackson Browne, Ani Di Franco and Billy Braggconnected. Even better was Bruce Cockburn’s Turn, Turn, Turn and Bruce Springsteen’s We Shall Overcome.

The Bruces indeed did exactly what I love, and what this blog is all about, and brought the social justice and art together under a Biblical umbrella. Turn, Turn, Turn maybe made even more famous than Seeger by The Byrds is a straight lift from the Old Testament book of Ecclesiastes and We Shall Overcome started out as a Baptist hymn.

Springsteen of course revisited the joy of recording this song and eventually released an entire album called The Seeger Sessions. This record, and the wonderful tour that followed, brought Seeger closer to my affections and also inspired my MTh thesis on music as a transformational power both spiritually and socially.

The Seeger songs that Springsteen chose, and again they were not ones Seeger wrote but ones he used for transformational reasons through the Civil Rights Movement of the early Sixties, gave me musical references to the theology of James Cone’s book The Spirituals and The Blues. That Springsteen used five Christian hymns/spirituals on this record, and made it up to seven when he toured the record, was good evidence to me that music could make an impact for the spiritual and the injection of the spiritual into justice issues.

As we celebrate Seeger's legacy on what would have been his 100th birthday I see him as more than a singer. He was an activist. He didn’t only love his art. He loved the human race. He chose not a road to commercial success but decided to take his art and use if for the good of humanity. He is remembered for more than the songs he sang, he is remembered for what those songs were about. He didn’t write We Shall Overcome but his use of that old hymn in the context of civil rights has led to it becoming, as Springsteen wrote in the programme notes of the Seeger Session Tour, one of the most used songs wherever there is injustice across the world.

In some ways we could see Seeger in one of Springsteen’s own songs. The Ghost of Tom Joad, so powerfully re-recorded on Springsteen’s new album High Hopes, could be a blend of Steinbeck’s fictional character Joad and the real life and vocational ambition of Pete Seeger: -

"Mom, wherever there's a cop beatin' a guy
Wherever a hungry newborn baby cries
Where there's a fight against the blood and hatred in the air
Look for me mom I'll be there
Wherever there's somebody fightin' for a place to stand
Or a decent job or a helpin' hand
Wherever somebody's strugglin' to be free
Look in their eyes Mom you'll see me."

Mr Seeger, for your influence we thank you. We really believe we will go on hearing you…