I SURMISE MY CHANGE OF OPINION ON A SUNDAY BELFAST MARATHON 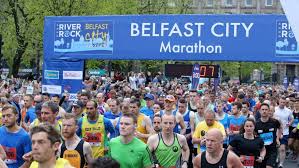 It used to make me so mad! Belfast City Council did not only run a half marathon on one Sunday on September but there was also non motorised Ciclovia Day on another Sunday in the same month! Twice in a month, sometimes two weeks in a row,  my congregation would have road closures preventing them from getting to Church.

I was angry. Whatever Church going figures are these days there is still a large part of the Belfast population that do go to Church, Church life is deep in the historical fabric of the city and they are thoughtlessly ignored in such scenarios. I would go as so far as to suggest that Church goers are not even considered in Sunday decisions.

In my annoyance with the situation I took on the local politicians. I got the answer I expected. The morning was the only time to hold these events because that would impact businesses. Just as I thought, the finances of a city are more important than the spiritual soul.

I should not have been surprised at that. I bartered for a compromise. If they even alternated the years, one morning, the next afternoon, we would organise and run the afternoon year for them! No one came back to me.

Then… one morning, I was standing waiting to start the morning service. It was a half marathon day and I was agitated. A member of the congregation, who I have known for a while lot longer than I have been minister at Fitzroy, walked past and asked how I was doing. When I replied about the half marathon, he stopped and asked if I wanted it any other way.

A light flicked on in my head. Of course. We are the Church. The subversive followers of Jesus. The early followers of Jesus weren’t fighting with the powers that be over crowds running the streets on a Sunday. This place of divine rights was a long way from the Divine who told us to deny ourselves, pick up our crosses daily and follow him!

Humility is a vital posture for Jesus followers. One that got catastrophically lost when the Church got caught up with Constantine and became comfortable with entitlement and power. The humility of Jesus himself is our example. Jesus did not live a life of entitlement, Indeed that great hymn in Philippians 2 reminds us that he gave up his entitlement to sacrifice himself for the world.

Sunday Observance was one of those entitlements that came about by Constantine’s conversion. The early Christians didn’t have their Sunday off. They went and worshipped before they went off to work. Sabbath is a crucial idea for the people of God but it is no longer tied to a specific day. As Jesus put it, “Sabbath was made for man, not man for the sabbath.” As a result some of our congregation will be running to raise money for worthy and Christian causes.

Fitzroy are sadly not close enough to the Marathon route so we cannot serve the city with refreshment, music and encouragement. We will humbly and subversively make our way through the closed roads to worship together and we will be praying for the runners, especially our own, and the charities that many of them are running for.

We no longer control the culture but rather than complaining we can serve! Thanks for sharing your journey, which many of us have had to make.