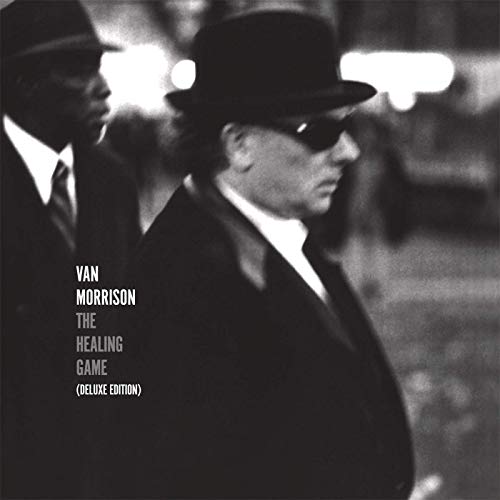 Oh what a Van-fest! In this 3 Cd digipack CD box there is a treasure-trove of goodies.

It is the kind of thing that I would be up to with my Playlist series. On the back of the original The Healing Game, which has not been remastered, we get the B-sides of singles from the time. Then we have CD 2 which is a collage of songs from The Healing Game project and various other projects from the era.

So, if unlike me you haven’t already, you don’t need to hoke out - CD singles, Sult, Good Rocking Tonight and The Songs of Jimmie Rodgers, John Lee Hooker’s Don’t Look Back and Lonnie Donegan’s Muleskinner Blues - because the Van tracks from them are here.

On CD two there are three collaborations that bring some fantastic tunes. I’ve been particularly loving the rocking rhythm and blues of his five songs with Carl Perkins. Four of these have been previously unreleased and one of those My Angel is a co-write. This second disc has ten previously unissued songs including a Morrison original Didn’t He Ramble and A Kiss To Build A Dream On made famous by Louis Armstrong in 1951.

There is more! The third disc is an absolutely pumping live show from Montreux in July 1997. Just a few months after the release of The Healing Game the set list has seven songs from the record. This is the Morrison’s few years with Brian Kennedy bringing backing vocals. Kennedy’s singing added grace notes indeed. That high end voice gets close to angelic and when he and Morrison play off each other like a call and response, it is climactic and electric.

So, as I say, a treasure trove! In the end though, what the three discs did for me was highlight the strength of The Healing Game in Morrison’s phenomenal body of work. There are six varied versions of the title track here, three versions of Fire In The Belly and Sometimes We Cry. What these versions did was throw different hues across them and the entire album. It rose up my favourite Morrison records list for sure.

Then… and maybe contrived but… these dongs were recorded between the Northern Ireland ceasefires and the Good Friday Agreement. So when I hear: -

To the days of yester-year

You cannot live on in the past

An' I've known so many people

They're still tryin' to live on in the past

Here I am again

Back on the corner again

Back where I belong

Where I've always been

It don't ever change

I'm back on the corner again

In the healing game

Morrison used yet another acoustic version of The Healing Game on a fundraising album Across The Bridge Of Hope for the victims of the 1998 Omagh bomb. Morrison always said it was a song from America, doo-wop singing on street corners. Healing is a spiritual thing here and Van was intrigued by it - The Healing Has Begun and Did Ye Get Healed just two other songs on the theme! It’s hard as you listen to some of these versions to not see those corners as the streets of East Belfast where, whatever his geographical place, Van Morrison always seems close to.

We are still needing that Healing on his Belfast streets in 2019!

Hi is this release available in Vinyl format not cd