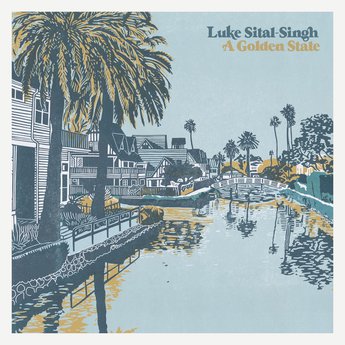 Luke Sital-Singh’s recent EP gave a few hints to the man and his new location. His covers of Jackson Browne’s Late For The Sky, Graham Nash’s Just A Song Before I Go and Neil Young’s Harvest Moon and Big Star’s Thirteen could have been recorded in Laurel Canyon circa 1970. He shared how driving down the Californian coastline inspired the EP.

Going the full hog, young Luke has now settled in LA with his wife and A Golden State declares right on the front cover his west coast record. There is an early 70s gentleness and sparseness here. Jackson Browne is a good reference.

It is a warm and intimate listen. There’s a drum beat or a symbol bang here and there but these perfectly crafted songs sit on top of the lightest guitar or piano touches. Silhouette is the only song that runs away with itself.

Sital-Singh uses the highest part of his vocal range a lot of the time. He used to write with Iain Archer and it is it’s Archer’s voice, not his co-writing or production that has followed Sital-Singh to America. Both my wife and my daughters thought it was the long awaited new Iain Archer album when they heard it… and they are Sital-Singh fans! It has less drama than previous albums. It utterly beautiful throughout.

The songs. I imagine that is the point for Luke. They are about California though not in the Beach Boy’s sense. It is not so much the geography as the relocation that seeps to the top of the content’s intent. These are songs about a couple very much in love, their love is still young and blooming. Yet, they have taken themselves somewhere new and feeling the vulnerability of unfamiliar things. They need each other in that vulnerability.

Falling's unavoidable to get away from where you've been

I think I have a song, there's a line in it for you to sing

Would you sing it for me?

I’m cynical of heaven now, but you make me believe

I love the music and the grace in which you move

I love the rhythms that you choose

And the melody of how you said, "I do"

We are back to Jackson Browne’s early 70s introspection. You can hear a few of these songs sitting snuggly on Late For The Sky. Particularly for me The Last Day a poetic imagining of the last day of someone’s life. It is an astonishing song for one so young. The inevitability of mortality, acknowledgement of final separation and asks all the questions we should ask in advance. Have we loved enough, lived enough and thanked people we need to thank in time? The song takes us right through the last day and ends with that need of one another again:

But I'd hold you close and you'd pray and pray

Whisper everything was gonna be okay

Our final kiss would bring such bliss

There are many lessons from the melodic exercise as the closing lines conclude:

On the last night of my life

Think I'd rather be surprised

Now every night when I close my eyes

I hold your hand so tight

These words and rhymes and ideas delivered so tender and touchingly in the purity of Luke Sital-Singh’s voice. Oh, it’s good. Then, just when I think I love it, I listen again and hear more memorable lines and compassionate ideas that I have missed before.