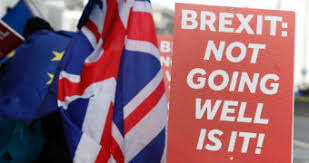 Brexit! It is almost beyond belief. Like watching Bill Murray’s Groundhog Day without any of the humour. Whether you are a  Brexiteer or a Remainer surely all of us are exasperated by the incompetence, unaccountability and immaturity of our politicians. All of them, it seems to me!

As I see it, we have political parties who think they are engaged in some school debating society event. There are arguments and meetings and deals but they are all about self obsessed ideologies rather than the common good of all of the people.

Our own Northern Irish representatives, The DUP, have their ideological red line. They do not want a border in the Irish Sea. I understand that that is deeply held but that it should be held up above the best pragmatic exit deal finds them ignoring the common good.

Sinn Fein have their ideological red lines too. Their stance against sitting in the British Parliament. Again I understand where that comes from in their long held beliefs and determination not to take vows to what they perceive as a foreign country. I have heard them argue that what happens in Westminster has nothing to do with Ireland. However, never has that been more wrong. By not taking their elected seats in Parliament they have let down the people of Ireland, north and south by putting ideology before representing those that Sinn Fein claim to represent on both sides of the Irish border.

I know that political parties need to have principles. I can respect that those principles will be different and that I will disagree with some of them. However, it is when those principles, whatever they are, are given priority over people that truth needs to speak to power.

Of course DUP and Sinn Fein red lines and principles have cost us our Local Assembly for 800 days. Principles more important than health and education. Negligent and reckless!

The Old Testament prophets are particularly vexed when those in power lose sight of the needs of all of the people, particularly the marginalised. Even religious leaders who seem to have been keeping all the correct principles of religious worship working were lambasted and damned for their losing sight of the common good of the people. The Bible has special emphasis on the widow, the orphan, and the refugee, those likely to be overlooked by the habits of the culture.

So, I beg you all who have influence in Westminster to stop and take a breath. Take a walk outside the hothouse of hot air and white noise. Take time and have a long gaze across the horizon of the people that you represent. All of them. Peer closely into the nooks and crannies. Look in the eye of those often forgotten. Those who voted for you and those who did not. The rich but more importantly the vulnerably poor.

This is a historical constitutional crisis. Be sure that it will be analysed down through history. It is time to ask how you want to be seen. As those who held to the principles of the red lines or those who compromised on principles but made the decisions that led your people, all you people, into peaceful and prosperous times.