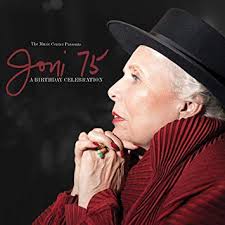 I love Joni Mitchell and I have shared on Soul Surmise before that I love Tribute albums. I am always posting playlists of covers of artists. Even better is when the album is from a Live Tribute concert! So, Joni 75 is a beautiful thing! I had heard about the gig, then that it would be released as an album and I waited patiently for release. I was not disappointed though for me not every song works.

Joni Mitchell’s catalogue of work over 50 years is as strong as anyone else in the genre. Of course those 50 years covered a range of sounds. When it comes to songs that can be covered it seems that the earlier ones have always been the most popular. I don’t think that is to do with the quality of the song so much as the intricate arrangements of the later work.

So with Joni 75. Though Emmylou Harris does Magdalene Laundries from 1994’s Turbulent Indigo, that song was written 27 years after the next youngest song Dreamland from 1977’s Don Juan’s Reckless Daughter. It is no surprise and a delight for me that four of the songs are from 1971’s seminal Blue. My other favourite record Hejira gets two cuts, Amelia and Coyote.

Coyote is of particular intrigue to me. It might be one of the first Mitchell songs I ever heard, her version on The Band’s Last Waltz, and the singer is Dublin’s Glen Hansard.

Amelia is done by Diana Krall whose previous covers of A Case Of You and Black Crow are particular favourites of mine. I do wish she had done A Case Of You here. I have blogged elsewhere that that might be the best song ever written and Kris Kristofferson, even with the help of Brandi Carlile doesn’t quite eek out its poetry or emotion.

Noah Jones who worked with Herbie Hancock on his fascinating project River: The Joni Letters sings the same song Court and Spark, James Taylor does River and Woodstock, Rufus Wainwright gives us All I Want and Blue and perhaps the very best vocal of all is Seal's Both Sides Now.

Thrown into the mix of all these Mitchell classics is Graham Nash. Nash does not do a Joni Mitchell song at all but his own Our House which was written in the Laurel Canyon home that Nash shared with Mitchell when they were a couple. It is a beautiful song of domestic bliss and sits perfectly in a concert set list of Joni Mitchell classics both in style and indeed quality.

Songs might actually be as good as the versions of them that other artists do. If that is the case then once again it is clear that Joni Mitchell is one of the all-time greats!

my playlist of my other favourite Joni Mitchell covers here