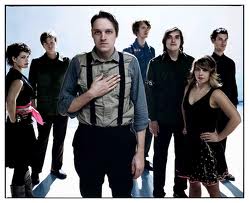 "I had a somewhat religious upbringing," he says. "Not strict, but it was there and I’m kind of thankful for that. If you grow up just watching MTV, that’s its own form of religion and it’s not even based on happiness or communal responsibility. I mean, try to construct a worldview out of that."

It sounds, I say, both from his conversation and his recent songs, like he still misses that faith-based sense of community. "Yes. I guess I do," he says, after some thought. "I’m not practising, I don’t go to church, but what I got from it was a sense of belonging to something bigger. What I really miss is being forced to be in a community with people that aren’t the same as you. Then, you really have to work through the ways that you’re different. I think that’s important and it’s missing in youth culture. I guess some of the songs are a reaction against the tyranny of youth culture, where you only hang around with people who dress like you, think like you and listen to the same music as you. Even though we are seen as the quintessential indie band, I feel very far from that culture a lot of the time."

The above quotes are a fascinating article about Arcade Fire, in The Observer newspaper by Sean O’Hagan. What is it about the Mormonism that has brought faith back onto the artistic palette of good recent rock records; I am thinking of The Killers as well as Arcade Fire? Whatever, you don’t expect journalists to have a conversation with a British band and have them speak about Church communities!

Win Butler’s comments about the benefits of Church community comes in the light of the fact that the band’s album Suburbs is a critique of youth culture. As so many people, even believers, suggest that growing up in Church has been detrimental to their lives, Butler suggests the opposite. His phrase, “What I really miss is being forced to be in a community with people that aren’t the same as you”, is most prophetic. Perhaps the MTV world that has created the homogeneous and spoiled generation he critiques so strongly are so pampered that the give and take of real community is too much for them.

Even Churches have become little communities, with great vocal emphasis on community, that are just a group of refugees who couldn’t take the friction and self sacrifice of building real community so they withdrew into an easier option. It is easy to create community with those who all agree with your style of worship, theological opinion and song playlists. Easy and pretty much useless to any sense of spiritual growth.

The community that Jesus birthed and that we read about at the end of Acts 2 was a menagerie of quirks and freaks and ages and backgrounds. It was a sign of his transformational power that they could be held together. It was a part of their lifetime discipleship course that they should be forced to shape and hone each other in their differences and disagreements.

It is why I love being minister of Fitzroy. Our community is differences right across the pews. Different ages, different backgrounds, different spirituality journeys, different theologies and different opinions about everything. The rubbing together of ages, denominational backgrounds and theological opinions develops both belief and behaviour. If done in a grace centred respect it also prevents mono-theological arrogance and judgementalism. Holding tether such varied and vibrant community tests my own discipleship too!

Church communities where God's grace are is not needed seem pointless and indeed perhaps Godless. They are certainly no advert for God, just another club that could be about golf or yachts! Oh for many communities like the one Butler misses...and oh for mine to be like that one.