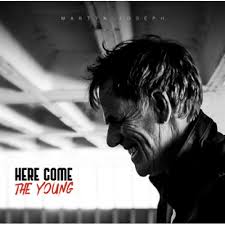 I might have said before but a Martyn Joseph comes guaranteed to be a collection of good songs. For thirty years he has not let me down.

The trouble with his consistent consistency is that you can become complacent. I listened to Here Come The Young and ticked the box of another good record.

Then I listened again. It might have even taken the third listen before I heard one of Martyn Joseph’s best records yet .

Now, that doesn’t mean it has the very best songs though it might have. This Glass has already been a main stay of his live show for a couple of years now. I can hear Loves Majority being around for some time and Driving Her Home To London might replace the classic Cardiff Bay as a grown up version of a song from father to child.

What lifts Here Come The Young above Martyn’s twenty previous albums is Gerry Diver. In the most modest of touches Diver from a very folk trad background, he studied under Mícheál Ó Súilleabháin an Irish music legend for goodness sake, adds deft touches of banjo, mandolin and particularly violin.

To be fair Pete Flood’s drums and percussion deserve a shout out too. Almost an acoustic guitar record gets some beats that lift the songs with energy.

Whatever journalist in Melody Maker suggested that Martyn made Leonard Cohen sound like Julie Andrews simply wasn’t listening. On this record the glass is, as the song suggests half full. A songwriter often bemoaning American Presidents and British politics might have been tub thumping here but no... it is a record full of hope.

Martyn is particularly taken by the young. The title track looks across the world to Malala campaigning for girls education in Pakistan or the youth in America protesting gun laws or the school children in Europe leaving school to campaigning for environmental issues.