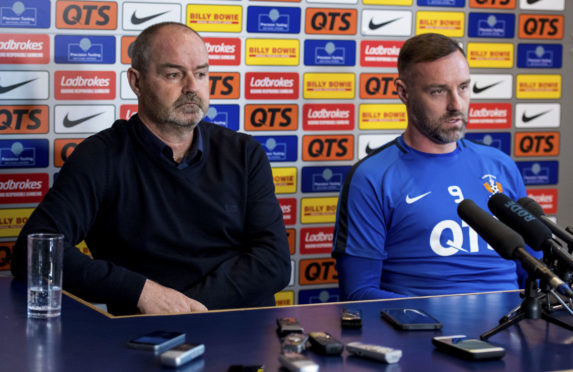 Sectarianism has got its ugly head back in the headlines this week. Rangers fans verbal abuse of Kilmarnock manager Steve Clarke and Celtic fans’ similar  verbal abuse of Kilmarnock striker Kris Boyd. Steve Clarke’s criticism of such attitudes in the west of Scotland has been harsh. We wait to see what Rangers and Celtic do to deal with a poison that has been running through Glasgow football for decades.

Sectarianism is a scurrilous thing that divides communities, stokes attitudes of arrogance and pride and ends up with hatred as an evil cancer eating away our humanity.

Jesus knew that sectarianism threatened his Church. How bizarre to pray “I pray that they will all be one, just as you and I are one” even before there was a “one” before the Church was formed. Jesus could see our propensity to divide. He had a tiny glimpse of 100 varieties of Presbyterian at the beginning of the third millennium. Such propensity, he knew, could lead to sectarianism.

I cannot do anything about the west of Scotland but I am determined to do something about sectarianism in Belfast. It has been a priority for Fitzroy and myself for a long time to dismantle this polarisation at the heart of our society.

When our Northern Ireland institutions at Stormont were brought down, over two year ago, the news came with thoughts that bitter sectarianism was up ahead. Immediately I phoned and asked Fr Ciaran O Callaghan from Clonard Monastery to come the very next Sunday and pray our prayers of intercession. He came and boy what a prayer!

It was a symbol that attacked the heart of sectarianism as quickly as we could. I always fear that I will be proved wrong in some headline but as far as it depends on us in Fitzroy there will be nothing happen in our young people’s lives that would suggest to them that sectarianism is even a thing.

All ages in Fitzroy will find it difficult to demonise Catholics because they are so often among us. They are our friends. We have an ongoing joint fellowship with Clonard Monastery. We are invested in the 4 Corners Festival. As a result there are Catholics who feel comfortable being part of our community and Fr Martin Magill is recognised almost as one of us.

I am not going to diminish the years that it has taken, long before I came to Fitzroy, to create a non sectarian space, or to be a Church with a focus on erasing the lines of sectarianism. At the same time it is not rock science. It is simply making friends across the devil’s constructed wall and doing the simplest things to ignore that wall or better still pull it down.