Home Archives Profile Subscribe
U2: STAND UP COMEDY - NLOTH song by song
THE DRUNK WHO TURNED OUT TO BE A GREAT IRISH POET - ME & PADRIAC FIACC

ANTHONY TONER - OUR LADY OF THE WIND AND RAIN 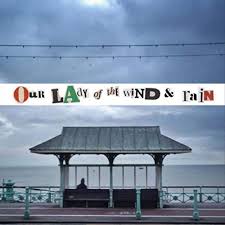 I can understand why Anthony Toner has been described as a cross between James Taylor and John Prine. There are hints of Taylor and Prine across this new collection.

I understand…. but I hear so much more. The opening That Kind Of Love, my song of 2019 so far, is what Southside Johnny and the Asbury Jukes might have sounded like if they had been from the opposite coast and fronted by Jackson Browne instead of Johnny - West Coast Jackson and the Malibu Jukes, if you will!

Hello Hello Hello has an Aztec Camera shimmer and suddenly you can hear a lot of Roddy Frame in Toner, like he is north Antrim’s version of south Lanarkshire’s pop poet.

However, on songs like Apology or the title track, no one sounds like Anthony Toner. Over a string of quality albums over the past decade Toner has found a voice that is very much his own.

It his lyrical dexterity that I particularly love. He is the Lionel Messi of lyricists, nimble, naturally fluid, quick to shift a line or rhyme. His images are original like free kicks no one has ever thought of. They sneak up on me and as they hit the back of the net (ear) I am a little in awe.

Take That Kind Of Love that I have already declared is my song of 2019 so far. Love as a piece of vinyl:

dusty and scratched, but still warm and alive:

Or love as religion:

with its own set of rules that no logic can shake

ten thousand years old, with its own pearly gates

You can see what someone like me who loves a good lyric and rhyme is a fan of Anthony Toner.

That Prine-like humour is most vivid on One For The Black Box:

“I couldn’t drink another verse

Of that God-awful rhyme

for stealing your time

I lost my phone

In the Poem That Time Forgot

I need someone to call my number

And tell me where I’m not.”

Such humour in rhyme, particularly in the middle of such supple poetry is not easy. One For The Black Box though is not just a paean for Belfast’s current coolest venue but the entire Cathedral Quarter where it is situated. Maybe all of us can relate to:

and high heels as well

they go clacking up the cobble stones

and I can’t look

into their Disney Princess eyes.”

I cannot get enough and could fill pages on this blog with more deft touch lyrics but let me leave you with the title track. Toner has a penchant for songs of the road, being away on tour and coming home from tour. There’s also a spirituality to his work, even though he holds to no creeds: -

“Every time I made it home again

It was a mercy that I can’t explain

Our Lady of the Wind and Rain

Was watching over me”

Anthony Toner is my kind of songwriter and Our Lady Of The Wind and Rain my kind of record. The melodies pull you in, the playing holds you there and then with every listen you marvel again at that line that caught you last time or find a whole new one, every time.