WRING OUT... BRING IN... AS A SKEIN OF BELIEVERS 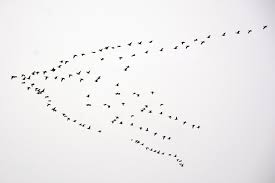 I was thinking of a poem/prayer/reflection for the first Fitzroy service of the New Year. I was thinking of a Rich Mullins line, "When the old world started dying and the new world started coming on." As I pondered the old and new I remembered an old favourite song from my teens. I used to start every new year with George Harrison's Ding Dong, an actual New year song which starts "ring out the old, ring in the new..." Before I knew it the first ring became wring and the second ring became bring and I was away...

Then I got into Karine Polwart's record A Pocket of Wind Resistance and added her idea of the communal skein of geese becoming a community of believers. Here's where it all went...

"In September, the geese snake in across The Firth of Forth from their summer nests in Iceland and the coastal cliffs of Greenland, clattering and honking in their ever shifting skeins. The outstretched wingtips of each migrating goose create an upwash, a pocket of wind resistance for the bird tucked in behind or below. These necks of ease, these aerodynamic sanctuaries, cut the drag by up to 65%. It’s a wonder, and it’s also a gale bitten struggle to maintain co-operation. Every goose takes a turn

…in the gorgeous symbiotic dance of their migration I’ve wondered: in what ways are we, as humans, like geese and how do we, can we sustain our own sense of being part of a skein?

I think this is a matter of survival." (KARINE POLWART)

Wring out the tears

The tears of our self indulgent choices

The tears of the hurt we have caused each other

The tears of the world and it’s fallen circumstances

Wring out the fears

The fears of the fear of the other

The fears of thinking outside our box

The fears that increase the gaps

That our brokenness has made between us

Always pushing the other away.

Bring in the hope

The hope of history that arcs towards peace

The hope of that flicker of light extinguishing the night

The hope of our hidden infections, healed deep down in our souls

Bring in the grace

The grace that always makes us the first to forgive

The grace that is unconditional to what has been wrung out

The grace that closes the gaps

That our brokenness has made between us

Always welcoming the other in.

Lord, in these New Year bells

And begin with us

God, shape us into a skein or resistance

Where we step up

Where we can tuck in

In a gorgeous symbiotic dance of sustaining one another

To be wringers out of the old

And bringers in of your new rule

In a world that so needs it.