THE GLORIOUS STORY OF A NEW SCHOOL IN KARAMOJA, UGANDA 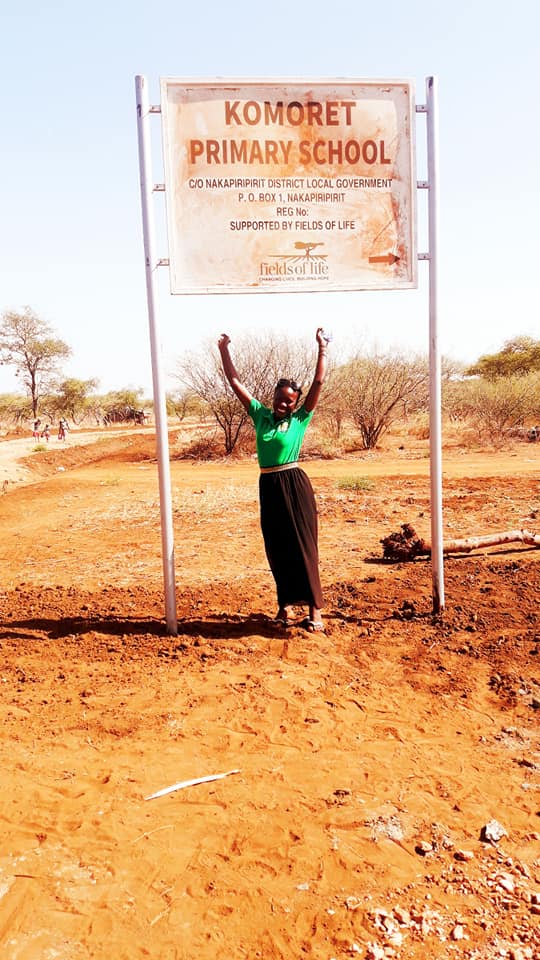 A year ago this week, I visited Karamoja in north eastern Uganda with Trevor Stevenson, the founder of Fields of Life.

This week I watched with joy, and not a little jealousy, as Trevor went back to Karamoja to open Komoret Primary School. It was another glorious story in Trevor’s emotional journey with Fields of Life in East Africa.

Karamoja is quite a place. When we drove into it, it was hot and the rivers were dry. The vegetation was brown and wispy, maybe not barren but seriously undeveloped. The murram roads were rough. There were few signs of civilisation. The mountains separating Uganda from Kenya were beautiful but a little stern too.

The children looked thin and there was evidence of little pot bellies. The clothes looked poor and ragged. Even the dogs looked beyond scrawny. MP Esther Davinia Anyakun, from nearby Nakapiripirit, told me that the first time she visited Karomoret, where we were, she wept. This was the poorest place I had ever been.

The Karamojong have been a little cut off from the rest of Uganda, partly to do with geographic isolation but also to their stubborn desire to remain as they have been. Though they now wear western clothes, over the top is still the traditional shawl blanket. The men all carry a stick, sign of the warrior and the fact that keeping cattle and indeed cattle rustling is part of the DNA.

Kampala’s world famous Ndere Cultural Dancers portray the Karamojong as a rough violent people, even in the act of romancing! My Ugandan friends joke about a common phrase “We are not waiting around for Karamoja to catch up!”

As we drove in I could not help but think that this was as close as I was going to get to the American wild west of two hundred years ago. I really felt that I was seeing the Ugandan frontier.

We were there for for the ground breaking of a new Fields of Life funded Nursery and Primary School in Karomoret. During the ground breaking ceremony, MP Esther called on this nomadic herding people to come down off the mountains permanently to get their children an education. Only 20% of Karomojong children are registered for schools! There will need to be a cultural change if children used to looking after cattle are to learn the long term advantages of sitting at a desk.

That was a year ago. This week Trevor travelled back to Karamoja for the opening of the school. After a ten hour journey from Kampala the Fields of Life entourage stayed the night in a hotel before the 45 minute journey for the 9am opening. Prompt in Uganda can mean within the next few hours!

Trevor soon realised that the new desks had not arrived for the classrooms. Trevor’s Church, Crinken Church of Ireland in Bray, County Wicklow had paid for them, so he had an even more vested interest. The desks finally arrived at 10 and the Fields of Life team filled one classroom with desks. The children, though, did not want to go into classroom. They were very nervous. Local leaders eventually got them to go in and asked them to sit down.

Trevor was flabbergasted. They sat everywhere, on top of desk on the seat and in every possible way that you could sit. Backwards. Forwards. Sideways. Trevor suddenly realised that these kids had never seen furniture before, never mind sit at a desk. This was their very first time ever to sit in such a way. They gradually began to relax a little and smiles began to appear. Trevor has twenty five years full of school openings but this one was very unique.

The guest of honour finally arrived, just after 12! He is the Deputy Speaker of Parliament. There were many other important people, a few of who were actually important! The speeches lasted over three hours. There were fourteen of them!

As Trevor got up to give his speech, the alumni came and flanked him on either side. At that point it was difficult to hold his emotions. These were his children. They all call him Uncle T. He had watched them coming to Fields of Life Schools, many getting sponsored. Now grown up and graduated they had taken their roles in Ugandan society.

This was the harvest of the harvest. The children, many of them sponsored whose lives were transformed by the opportunity to go to a school near their homes, have grown up and decided to do for the children of Karamoja what they had gifted to them! Trevor grew up a farmer. This is the kind of harvest way beyond farming!

Then Trevor looked around at the little ones in Komoret. He imagined the possibility of God’s kingdom breaking through in this neglected out of the way place, lives changed, communities transformed and hope built. as the three aims of Fields of Life read.

It was a very special day for Komoret, for Uganda, for Fields of Life and for Trevor Stevenson. Yet again, with yet another tear in his eye, he gave God the glory!