SHOULD WE FORGIVE GAVIN WHYTE HIS LEWD ACT 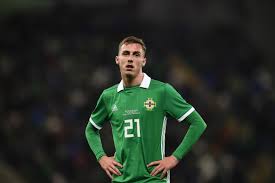 Northern Ireland soccer player Gavin Whyte is all over the news having been caught on video doing a lewd act in public.

Today, Whyte has responded with an apology:

"I apologise to anyone I offended - I was stupid and completely regret being part of it. I hope Oxford and NI fans can forgive me for a moment of real stupidity.”

Whyte goes on to say,

”It was wrong, I know that, but it happened and now I have to try and move on. I have so many good people around me.”

How should Oxford and NI fans, and indeed the public in general, respond to Whyte?

There is almost a classic Biblical repentance in his response. He actually uses the word forgiveness. If we take a Biblical template to repentance and forgiveness, it is all here.

Gavin Whyte’s hopes of forgiveness should not go unfounded. We need to accept that he has acknowledged his wrong doing and learned from his mistake.

That should be the end of this newspaper story. That should erase the black mark against his name. It should not be held against him or dragged up at any time. Not even by away supporters! He should get a fresh start. He should be allowed to move on as he has asked for.

The press and indeed wider society is not good about such things. Away fans even less so! We hold something done decades ago against people whose lives have radically changed since their misdemeanour. That lack of forgiveness paralyses individuals and society. Those of us who don’t forgive get caught up in the bitter stagnation of the society they themselves have paralysed.

A Biblical model for forgiveness would be such a helpful force to the transformation of individuals, like Gavin Whyte, and society as a whole.

Gavin Whyte you are forgiven. Or you should be. I wonder if God would find it unforgivable not to forgive a repentant footballer!

note: for the theologically squeamish, this article has nothing to do with Gavin Whyte and God. What he does in that realm is up to him and God. This is about societal forgiveness.

This year's 4 Corners Festival from January 30 - February 10th is all about forgiveness. Info here -  https://4cornersfestival.com