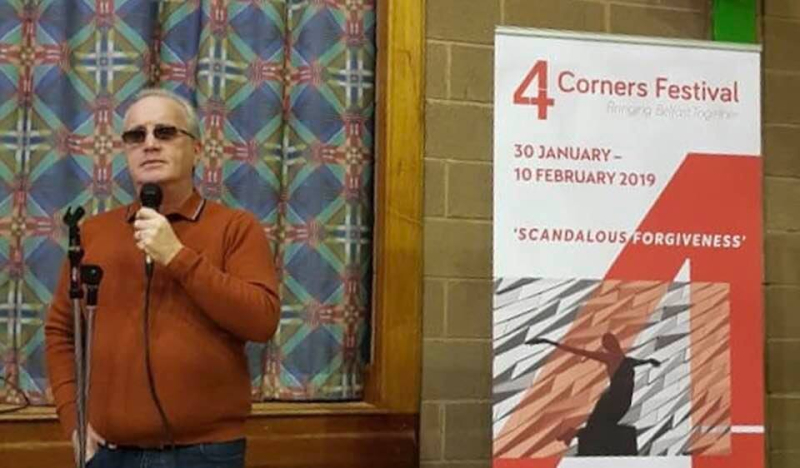 There was a story in Richard Moore’s powerful address to the 4 Corners Festival Prayer Breakfast. It was not long after Richard had been blinded by a British Army rubber bullet, while he was walking home from school. He was sitting in his living room in the Creggan and his mum was in the kitchen. He heard his older brother talking to his mother.

“Mammy, they killed Uncle Gerry and now they have blinded our Richard. It is time to stand up and fight back.”

Richard's mother had a different slant.

“Son, if you want to help your brother, he in the next room. Go and help him. You are not going to help Richard by going and doing harm to somebody else.”

It is profound wisdom from a woman who had every reason to want revenge or justice or whatever we might call a tit for tat response.

Our theme for the 2019 Festival is Scandalous Forgiveness and Richard was a well chosen speaker. He set the tone for the entire Festival absolutely beautifully.

Richard Moore took his parents lead and instead of turning bitter about losing his sight has used it as a different perspective to look at life. Colour of skin and dress codes are key visuals for our prejudices. Being blind, Richard says that he only meets human beings. He also appreciates that being blind has led him into even brief engagements with strangers that are more deeply humane because they will touch his band, take his arm, help him off a bus.

Going further than letting go of his bitterness Richard sought to forgive. He speaks about sitting thinking about the man who fired the rubber bullet that blinded him. Richard wondered if that soldier ever thought about him. In the end he sought the soldier out and met him. He jokingly spoke of their first meeting as being like a nervous first date but went on to talk about liking Charles as he is called.

In some circles such a forgiveness and act of reconciliation might be seen as scandalous. Forgiving the Brits who blinded him and killed his uncle. Not for Richard. He made clear to us that forgiving Charles did not justify what Charles had done. The past remains after the act of forgiveness. The future is different though.

For Richard forgiveness is a gift that he was given for his own good. It very much begins within himself and is ultimately for himself. Even if Charles hadn’t wanted to meet him or accept his forgiveness that act of forgiving would have done its work in Richard’s life, allowing him to let go and move on.

The energy that Richard Moore found from moving on is evident in everything he does. A married man with two children, a musician and major singer in his Chapel’s Saturday Mass Choir. He played in bands and ran two pubs before selling them to set up Children In Crossfire.

Children in Crossfire works in Ethiopia and Tanzania to change the circumstances of children born and raised in poverty. They work in Ireland the UK also.

Richard’s story is not about someone being made blind one afternoon coming home from school. It is the story of how someone dealt with that moment and moved on from it. it is a story of honesty, resilience, compassion, courage and vision. Vision seems an interesting word in Richard’s story but it is an accurate one.

Richard Moore is a man of vision. It is easy to see why the Dalai Lama calls him a hero. This morning he set the tone of the 4 Corners festival 2019 beautifully. He was powerful, poignant, prophetic and pastoral. He is one of those we should be looking to as we try to give our wee country a better future.