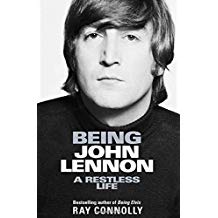 I am not sure when I realised that I no longer liked John Lennon. That actually he was a bit of a twit. I know that it was a kind of conversion experience. It’s well over a decade now and I have been living with it as some kind of shameful secret, filled with doubt.

I mean there was a time at school when Lennon was my man. For a time I thought he was the clever Beatle and a man who really changed the world. There is no doubt that he was formative in who I am today. I often describe my late teen age journey was finding Jesus through The Beatles. The Beatles set up all the things I wanted to be about, All You Is Love, Give Peace A Chance and Imagine.

Lennon was the real Beatle. He started it. He wrote the tough songs. Paul’s were a little soft. Then he died. Like a martyr to changing the world. Like a secular saint.

As I say, somewhere around 2005 I reassessed Lennon and concluded that he was nothing like a saint. I started questioning his political songs and Lennon’s assessment of the causes he supported. I began to consider the behaviour that broke up The Beatles. I came to dislike even more that spastic faces he threw during Beatle interviews. Even his son Sean was none to complimentary about his father in a Rolling Stone interview.

I kept my scepticism about Lennon to myself bit like when I became an atheist for ten years at the age of seven. Ray Connolly’s new book Being John is like a relief as Connolly who knew Lennon well comes to the same conclusions as me only with actual research to back it all up.

Connolly even gives Paul his rightful place in The Beatles. There was a stage in the book when I sensed Paul was the real leader from the beginning, the better musician and the first to write his own songs. Certainly there is that lazy period for Lennon around 67-69 when McCartney is out-writing him on a weekly basis and even Harrison starts writing better songs.

Then, just as I have the written proof for my reasons to dislike John Lennon I find some sympathy. Ray Connolly is a friend of John Lennon’s. This is not a Albert Goldman hatchet job. Connolly is the most honest biographer of Lennon in the copious amounts of Lennon biographies I have read but his honesty is not hatred.

As he traces Lennon’s young life from his father’s leaving, his mother giving him over to Aunt Mimi to his mum’s tragic death just as he and his mother are bonding. This is a tough psychological ask. Connolly suggests that DNA traits from his mum and dad were destined to create a rebel and Lennon revelled in that but also felt the hurt.

It is a drama filled and traumatic life and Ray Connolly lays it out with lights shining on the warts and all. Yet, in all the proof of me being right about Lennon, I found myself, at the end of the book, being a little more sympathetic. It was as if Connolly laying out my doubts helped me to somehow believe again.

As I was reading it I was also watching and listening to the Imagine album that had been released in deluxe and I started to enjoy the songs again. There is that scene where John brings a fan who thinks Lennon is some god with all the answers to his life, into the house for some breakfast and assures him he only an ordinary human being. There in that glimpse of humanity I was able to get my Lennon records back out and listen.

Ray Connolly’s book can only but hop, skip and jump across a packed life but he lands on the telling parts, unveils a sad soul who ended up somehow as the most loved mop top of a generation, a love that might not have helped him find himself. Perhaps love is all you need but we need to be careful what love and whose love we throw our deepest needs upon.

Thank you, Steve. I was determined to make the book as honest as I possibly could even though I knew that some readers might not like the John Lennon that emerged - and some don't. It seems to have worked in the opposite direction with you - Ray Connolly